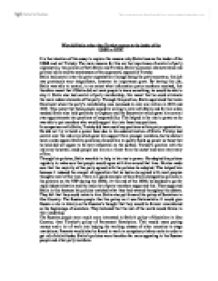 Why did Stalin rather than Trotsky emerge as the leader of theUSSR in 1929?

Why did Stalin rather than Trotsky emerge as the leader of the USSR in 1929? It is the intention of this essay to explore the reasons why Stalin became the leader of the USSR and not Trotsky. The main reasons for this are the importance of control of party organisation, the policies of both Stalin and Trotsky, Stalin's personal characteristics and political skills and the weaknesses of his opponents, especially Trotsky. Stalin had control over the party organisation through being the party secretary, this job was previously very insignificant, however its importance grew. By having this job, Stalin was able to control, to an extent what information party members received, this therefore meant that if Stalin did not want people to know something, he would be able to stop it. Stalin also had control of party membership, this meant that he could eliminate the more radical elements of the party. Through this position, Stalin supervised the Lenin Enrolment where the party's membership was increased to over one million in 1924 and 1925. This meant that these people would be willing to vote with Stalin and for him when needed. Stalin also held positions in Orgburo and the Secretariat which gave him control over appointments into positions of responsibility. This helped in his rise to power as he was able to put members who would support him into these key positions. ...read more.

Stalin's policies were therefore far more appealing to the Russian people and other party members. Stalin's personal characteristics and political skills were a very important reason why he emerged as the leader of the USSR and not Trotsky. Stalin was a more down to earth and practical person than most other leading party members. This meant that he was able to relate to the people of Russia as well as the many working class members who joined the party during the Lenin Enrolment. His personality also meant that nobody saw him as a threat, they were much more concerned with Trotsky. They also had this idea from Stalin's leadership positions in the party compared to Trotsky's leadership of the red army. Stalin was vastly underestimated, he had been called a 'grey blur' as he was thought of as being so insignificant. Stalin was also able to use Lenin's death very much to his advantage, it can be said that Stalin, was in a way, lucky at the time of Lenin's death as Trotsky had been ill and had been sent out to the south of Russia. Stalin then told Trotsky that he would not make it back for the funeral. The Russian people did not know that Trotsky had been ill and it was seen as though he could not be bothered. ...read more.

Also, if Trotsky was not a weak opponent, Stalin would never have been able to build such a strong position within the party, but this was also contributed to by his political skills. Also, the weaknesses of Kamenev and Zinoviev helped Stalin as when they formed the triumvirate to work with Stalin, they were easy to get rid of once they had been used as they were needed. They were too weak to stop Stalin from bringing in supporters who he wanted in the party and they did not join with Trotsky until it was too late. Another main point is that Stalin tricked Trotsky into not going to Lenin's funeral, this made his reputation greatly improved and ensured that he was ahead in the struggle from day one. Stalin was able to do this, partly through luck at Lenin's death, but also through his personal characteristics. This also helped Stalin to use the Lenin legacy and meant that the public would automatically think that Stalin would be a leader like Lenin. Stalin used many situations to his advantage and was able to sit back while other party members destroyed their own reputation, and helped his. He used his political skills to manipulate situations that had been brought about though luck, he changed his policies to fit in with the ideas of the times and used his opponents weaknesses to his advantage. ...read more.