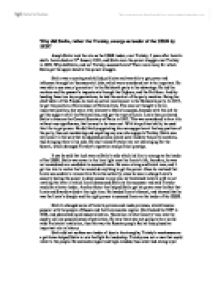 Why did Stalin, rather the Trotsky, emerge as leader of the USSR by 1929?

Why did Stalin, rather the Trotsky, emerge as leader of the USSR by 1929? Joseph Stalin took the role as the USSR leader, over Trotsky, 5 years after Lenin's death. Lenin died on 21st January 1924, and Stalin won the power struggle over Trotsky in 1929. Why did Stalin, and not Trotsky, succeed Lenin? There were many for which Stalin got the upper-hand in this power struggle. Stalin was a cunning and skilled politician and was able to get power and influence through his 'bureaucratic' jobs, which were considered not to be important. He was able to use every 'promotion' in the Bolshevik party to his advantage. He led the workers and the peasant's inspectorate through the Orgburo, and the Politburo. And by heading these two key organizations, he had the control of the party machine. Being the chief editor of the Pravda, he took an active involvement in the Bolshevik party. ...read more.

Stalin was never in the lime light most his Lenin's life, therefore, he was not considered as a candidate to succeed Lenin. He was a strong and brutal man, and it got too late to realize that he would do anything to get his power. Once he realized that Lenin was unable to remove him from his authority; since he was in charge Lenin's security having the power to deny access to any one, he threatened Lenin's wife in not reveling the letter in which Lenin denounced Stalin as his successor and said Trotsky would be a better leader. Another factor that helped Stalin get his power was the fact that Lenin and Sverdlov died at the right time. He headed Lenin's funeral, and showed that he was the Lenin's disciple and the right person to succeed Lenin as the leader of the USSR. Stalin's changed some of Lenin's policies and made promises, which became popular with the people of Russia and the Communists regime. ...read more.

He did not realized that Stalin had built a strong base of power, and underestimated Stalin himself, and Stalin used his political skill and cunningness to out maneuver Trotsky. Stalin emerged as the new leader of the USSR 5 years after Lenin's death because of various reasons. But if explained simply, Stalin was a cunning and skillful politician; he got the right jobs which gave him power to build his own party of supporters. He was never seen as a threat to Trotsky, and always shown as a good man to the public, because of his peasant background; people felt that they he knew what they were going threw, and thus trust him. Trotsky's was his own weakness, since he was not willing to fight back as a politician, he was unable to get the support inside the party that he needed. He was a good orator, but could not get the positions in the party with his own people to get the power over Stalin. ...read more.