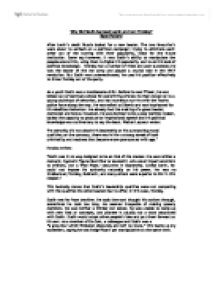 Why Did Stalin Succeed Lenin and not Trotsky?

Why Did Stalin Succeed Lenin and not Trotsky? Ryan Pollard After Lenin's death Russia looked for a new leader. The two favourite's were about to embark on a political campaign; trying to eliminate each other out of the running with their popularity, ideas for the future dedication. Some say however, it was Stalin's ability to manipulate the people around him, using them to higher his popularity and to aid his lack of political knowledge. Trotsky had a number of titles and past successes; he was the leader of the red army and played a crucial role in the 1917 revolution. But Stalin was underestimated; he used his position effectively to throw Trotsky out of the party. As a youth Stalin was a troublesome child. Before he was fifteen, he was kicked out of seminary school for committing crimes; he then moved on to a young adulthood of terrorism, and had numerous run-ins with the Tsarist police force along the way. He was exiled to Siberia and was imprisoned for his rebellious behaviour. He already had the making of a great leader; dedicated and brave. However, he was claimed to be a poor decision maker, lacked the capacity to produce an inspirational speech and his political knowledge was rudimentary to say the least. ...read more.

This was due to him self; he wrote this to Lenin in relation to the White and Cossack advance to Tsaritsyn, "somebody (or me) [be given] special authority in military matters to take urgent measures in South Russia before it is too late." His ambition to get to the top is evident in this statement. It shows he was not satisfied with his role at that moment, and urged for more work. Lenin became ill; he suffered a series of strokes which left him almost completely incapacitated as the leader of the Soviet Federation. A number of members took his place, however, Lenin carried on leading the party. Stalin was elected to take care of Lenin, and with Stalin's future in Lenin's hands, he was going to keep a good eye on him. It seems as though Stalin wanted Lenin out of the party, keep him away from political work as much as possible. One example when Stalin found out Lenin was engaged in political relations, he went in to a fit of rage over the phone to Lenin's wife for allowing a letter to be sent to Trotsky. Reportedly he called her such things as a "syphilitic w***e". ...read more.

This meant Stalin's rivals had no support in the party. Stalin needed more than this to make sure he would become leader. He used Zinoviev and Kamenev to attack Trotsky in numbers and so eventually Trotsky was dismissed as Commissar for War. Trotsky had no support at all at this point, and so was voted out by the members loyal to Stalin. His views clashed with the Party's new policy, communism in one country. After that Stalin again appointed people who were loyal to him. Due to this, Zinoviev and Kamenev were dismissed. They believed in fast economic modernisation but the majority of the Politburo believed in the New Economic Policy, a gradual reform of the economy. With the entire contenders kicked out, Stalin was now in complete control and without a single election. Stalin's ambition in the end prevailed. He worked his way up, and his positions in the party given to him, he used effectively. Trotsky lacked people support, and came across as an unpopular outcast. Stalin was patient in his actions, when he was General Secretary he simple waited and waited until he had the full support of the party. He was a pure opportunist. Trotsky thought his ideas how to run the country were going to drag him to victory, that wasn't that case, a lot more was required, and Stalin acquired it. ...read more.