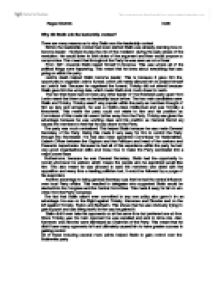 Why did Stalin win the leadership contest?

Why did Stalin win the leadership contest? There are many reasons as to why Stalin won the leadership contest. Before the leadership contest had even started Stalin was already planning how to become leader. He liked to play the role of the mediator during the early phase of the revolution. He would listen to both sides of the argument and then would propose a compromise. This meant that throughout the Party he was seen as not a threat. From 1921 onwards Stalin based himself in Moscow. This was where all of the political things were happening. This meant that he knew about everything that was going on within the party. Lenin's death helped Stalin become leader. This is because it gave him the opportunity to organise Lenin's funeral, which ultimately allowed him to project himself as Lenin's heir. ...read more.

This meant the party could not relate to him and his position as Commissar of War made him seem further away from the Party. Trotsky was given the advantage because he was working class and his position as General Secretary causes the members to feel that he was closer to the Party. The party was much centralised. This helped Stalin because he was made General Secretary of the Party. Being this made it very easy for him to control the Party through the Secretariat. He had also been appointed Commissar for Nationalities, Liaison Officer between the Orgburo and the Politburo and head of the workers and Peasants Inspectorate. Because he had all of this experience within the party he had very good organisational skills and knew how to make the Party secretariat into a major power base. ...read more.

This made it easy for him to win votes from the Party Congress. The fact that Stalin wasn't ever committed to any one policy also gave him an advantage. He was on the Right against Trotsky, Kamenev and Zinoviev and on the left against Tomsky, Rykov and Bukharin. This shows that he was obviously trying to gain support and was being tactful in the way he gained it. Stalin didn't ever take his opponents on at the same time but preferred one at time. Since Trotsky was his main opponent he was expelled and sent to Alma Ata. Also, Kamenev and Zinoviev were dismissed as Chairman of the Party. This meant that he didn't have many opponents left and ultimately caused him to have greater success in gaining control. All of these including several more points helped Stalin to gain control over the Bolsheviks party. Regan Kindrick Keith ...read more.