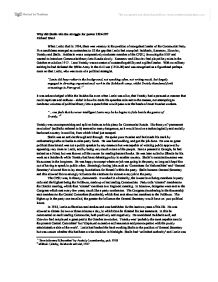 Why did Stalin win the struggle for power 1924-29? Richard Ward When Lenin died in 1924, there was vacancy in the position of recognised leader of the Communist Party. Five candidates emerged as contenders to fill the gap that Lenin had occupied: Bukharin, Kamenev, Zinoviev, Trotsky and Stalin. Bukharin was a comparatively moderate member of the CPSU, favouring the NEP and wanted to introduce Communist theory into Russia slowly. Kamenev and Zinoviev had played key roles in the October revolution 1917. Leon Trotsky was an orator of outstanding ability and a gifted leader. With no military training he had defeated the White Army in the civil war (1918-20) and was recognised as a figurehead perhaps more so than Lenin, who was more of a political strategist. "Lenin did keep rather in the background, not speaking often, not writing much, but largely engaged in directing organisational work in the Bolshevik camp, whilst Trotsky thundered forth at meetings in Petrograd."1 It was acknowledged within the Bolsheviks even when Lenin was alive, that Trotsky had a persuasive manner that could captivate and enthuse - aided in how he made his speeches relevant to the masses, not attempting to condense volumes of political theory into a speech that would pass over the heads of most Russian workers. ...read more.

Lenin had backed the hard working Stalin to the position of General Secretary but was unsure whether this had been a wise decision in hindsight. Stalin had 'unlimited authority' and Lenin was not sure as to whether Stalin would always use that power for the common good. In 1923 / 24, just before Lenin's death, Stalin used obscene language on the phone to Lenin's wife. Lenin amended his last testament, saying that Stalin was 'too rough' and 'must be removed'. Although Lenin died in 1924, Stalin's position as recognised leader of the Communists was not universally acknowledged until 1929, when Bukharin was voted off the Politburo. Between 1923 and 1925, two camps formed amongst the senior members of the Politburo. Zinoviev and Kamenev sided with Stalin against Trotsky in regards to the future of Communism in Russia. Trotsky wanted crash industrialisation and worldwide revolution, involving Russia in other countries' affairs whilst at the same time securing the footholds Communism had in Russia. Stalin (backed by Zinoviev and Kamenev) allied himself with the 'Leninist' policy of 'socialism in one country'. He argued that Trotsky was anti-Lenin, and began to dig holes in Trotsky's arguments and appearance in the party. ...read more.

His manipulation of power paved the way for his gradual elimination of competition within the party. His supposed greatest weakness (lack of intellectual firepower) was in the end his greatest strength. Trotsky underestimated Stalin and made a critical error in giving up control of the Red army, whether they would have supported him or not it was a strong position in the party to hold. Trotsky was a great leader, but was phased out by Stalin, who took greater notice of the political culture. This ruthlessness was undoubtedly key in Stalin's succession of Lenin. Zinoviev's defence of Stalin at the Politburo in 1924 surely made it only a matter of time before Stalin would take control of the party, the potential hole in his defence had been thoroughly plugged by the man that he would later expel from the party three years later. In conclusion, Stalin won the struggle for power through a combination of conscientiousness, ruthlessness and Trotsky's overconfidence. To suggest that Stalin was lucky in succeeding Lenin detracts from the strength of this combination. All this would however had fallen to pieces had Zinoviev understood the struggle for control of the CPSU in 1923-24. 1 'Revolutionary Silhouettes' by Anatoly Lunacharsky, pub. 1918 2 Mikhail Uritsky, Bolshevik activist, 1917 3 'The Prophet Unarmed, Trotsky 1921-1929' by I. Deutscher, pub. 1959 ...read more.