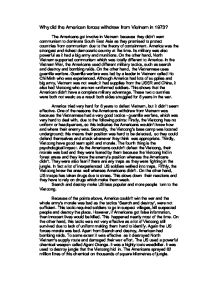 Why did the American forces withdraw from Vietnam in 1973? The Americans got involve in Vietnam because they didn't want communism

Why did the American forces withdraw from Vietnam in 1973? The Americans got involve in Vietnam because they didn't want communism to dominate South East Asia as they promised to protect countries from communism due to the theory of containment. America was the strongest and richest democratic country at the time. Its military was also powerful as it had a big army and munitions. On the other hand, North Vietnam supported communism which was totally different to America. In the Vietnam War, the Americans used different military tactics, such as search and destroy and bombing raids. On the other hand, the Vietnamese uses guerrilla warfare. Guerrilla warfare was led by a leader in Vietnam called Ho Chi Minh who was experienced. Although America had lots of supplies and big army, Vietnam was not weak; it had supplies from the USSR and China, it also had Vietcong who are non-uniformed soldiers. This shows that the American didn't have a complete military advantage. These two countries were both not weak; as a result both sides struggled for 8 years in the war. America tried very hard for 8 years to defeat Vietnam, but it didn't seem effective. One of the reasons the Americans withdrew from Vietnam was because the Vietnamese had a very good tactics- guerrilla warfare, which was very hard to deal with, due to the following points: Firstly, the Vietcong has no uniform or headquarters, so this indicates the Americans wouldn't know how and where their enemy was. ...read more.

It was a search and destroy mission, but this time they kill innocent lives again as they received false information. They killed 400 innocent villagers but actually none of them were Vietcong. However, the whole group claimed that of the all the dead bodies were Vietcong. Everyone in the army treated the attack as a normal and inevitable part of the war. After a year, soldiers who have knew the truth for My Lai massacre have asked the Congress to investigate this incident. The media has published photographs of the My Lai massacre and the published were shocked. This incident was a cover up for the failure of almost all the attacks. This was the clearest incident that the war has gone wrong. It was also clear that search and destroy didn't work. The US force had received so much pressure from the public. Furthermore, the US force was absolutely fed up of the war that could never be won. They knew there was not point to struggle in this position, but, the US still could not withdraw yet. In 1968, the Tet Offensive proved to be an important turning point in the war. This was also one of the reasons which Americans withdrew. The Vietcong (N. Vietnamese) attacked over 100 cities and other military targets. ...read more.

First of all, Nixon negotiate with countries like the USSR and China, who were the suppliers, Nixon put pressure on both countries to persuade Vietnam to stop the war. Nixon played it cleverly as getting other countries to do the job rather than letting US leave making it looks like a defeat. Moreover, Kissinger, Nixon's advisor, also tried to improve relations with North Vietnam, he had regular meeting with North Vietnam. Besides negotiate with other counties, Nixon decided to cut down the amount of troops in South Vietnam and build up South Vietnamese forces. Moreover, to make sure US didn't appeal to be weak, Nixon increased bombing campaigns against N. Vietnam to show he was not weak and military pressure in the US. He spread the war to Laos and Cambodia and caused much public honour. This makes US looked strong and it wouldn't seem US withdrawal was caused by the fear of Vietcong. To summarise, there were lots of reasons responsible for the US withdrawal. Both sides manage to gain in this war but they also lost a lot. Nevertheless, the US didn't gain a lot as it killed innocent civilians in the war. Moreover, although the US killed a lot of Vietcong, the US never manage to kill the idea of communism. Personally, I think if the US left Vietnam to decide what kind of government it wants, then all these money and lives won't be sacrificed. Moreover, the spirit of communism would still be there even though US killed all Vietcongs. ...read more.