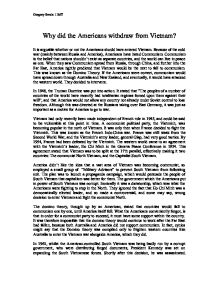 Why Did the Americans Withdraw From Vietnam?

Why did the Americans withdraw from Vietnam? It is arguable whether or not the Americans should have entered Vietnam. Because of the cold war (mainly between Russia and America), Americans have hated Communism. Communism is the belief that nations shouldn't exist as separate countries, and the world can live in peace as one. When they saw Communism spread from Russia, through China, and further into the Far East, America rightly predicted that Vietnam would be the next to fall to communism. This was known as the Domino Theory. If the Americans were correct, communism would have spread down through Australia and New Zealand, and eventually, it would have attacked the western world. They decided to intervene. In 1948, the Truman Doctrine was put into action. It stated that "The peoples of a number of countries of the world have recently had totalitarian regimes forced upon them against their will", and that America would not allow any country not already under Soviet control to lose freedom. Although this was directed at the Russians taking over East Germany, it was just as important as a motive for America to go to war. Vietnam had only recently been made independent of French rule in 1945, and could be said to be vulnerable at this point in time. A communist political party, the Vietminh, was becoming popular in the north of Vietnam. ...read more.

They educated the peasants, and gave them any land won. In return, the NLF required total support of the peasants; they were the sea in which the NLF needed to swim. The NLF only picked a fight if it had a chance of winning, and often did. America inadvertently reinforced the Vietnamese loyalty to Ho Chi Minh, in the belief that every peasant was an NLF supporter. Peasants were moved away from their homes in a plan known as the Strategic Hamlet Programme, so they could be watched by American soldiers. This cut off the peasants from other communities, so the NLF had no access to them. The peasants hated this scheme. American soldiers also took out their anger and frustration on the peasants. They knew there was an enemy, yet they could not see it. Everyone was the enemy. Because of the poor tactics among American Soldiers, guns were often left after a man had died, and many bombs failed to explode. The NLF used this to their advantage, making booby traps and arming their side of guerrilla warriors. Any other supplies were brought in through Laos and Cambodia, along a route known as the Ho Chi Minh Trail. This was tactically excellent, because the destruction of this trail would mean America going to war with two more countries. ...read more.

Without one of them, things may have been different, but they were all in place, and the consequences for America were humiliating. Despite not technically losing the war, America withdrew, and would have lost otherwise. The most important reason why America lost is that they weren't fighting for anyone. The government selected by the west was corrupt, they had no support from the peasants, and really the American mission objective was a lost cause. In the Second World War, whichever side won, someone would have benefited. This was not the case here. It was Vietnam vs. America, fighting in Vietnam. None of the US soldiers wanted to be there, and stood to gain nothing from fighting. The supposed reason for fighting was that communism would spread around the world. This was based on a prediction. As this essay pointed out earlier, communism can only exist if it has support. In developed countries, it has no appeal. Neither America nor Australia were likely to fall to communism. If communism was such a threat to America, why did it ignore its closest neighbour, Cuba, which was (and still is) communist? The truth is that America wanted to show the world that it meant business, by starting irrational wars, but really got more than it bargained for, when ancient tactics and poorly equipped soldiers left the world's most powerful country in a humiliating predicament. ?? ?? ?? ?? Gregory Swain 11MT ...read more.