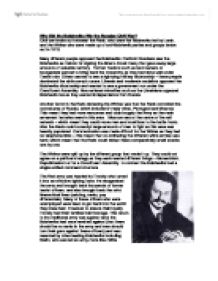 Why Did the Bolsheviks Win the Russian Civil War?

Why Did the Bolsheviks Win the Russian Civil War? Civil war broke out between the Reds, who were the Bolsheviks led by Lenin, and the Whites who were made up of anti-Bolshevik parties and groups broke out in 1918. Many different people opposed the Bolsheviks. Patriotic Russians saw the Bolsheviks as traitors for signing the Brest-Litovsk treaty that gave away large amounts of valuable territory. Former Tsarists such as land owners or bourgeoisie wanted to bring back the monarchy as they had done well under Tsarist rule. Others wanted to see a rightwing military dictatorship - these people dominated the white army's cause. Liberals and moderate socialists opposed the Bolsheviks dictatorship and wanted to see a government run under the Constituent Assembly. Also national minorities such as the Ukrainians opposed Bolshevik rule as they wanted independence from Russia. Another factor in the Reds defeating the Whites was that the Reds controlled the central area of Russia, which included 2 major cities, Petrograd and Moscow. This meant they had more resources and could supply the Army as the main armament factories were in this area. . Moscow was at the centre of the rail network - which meant they could move men and munitions to the battle fronts. Also the Reds could conscript large amounts of men to fight as this area was heavily populated. ...read more.

The dragon is wearing a top hat, which the Soviets associated with capitalism. The Soviet symbol of the hammer and sickle is also shown, which represents that he is fighting for the workers and peasants. This is a White Army propaganda poster depicting Trotsky as a red devil. The text above the picture reads, "Peace and Liberty in Sovdepiya". This shows Trotsky as an evil monster who is killing people and destroying Russia. The Red Terror was the mass killing of the Reds opponents by the secret police, the Cheka. From the start revolutionary terror was to be an essential feature of Bolshevik rule. Lenin said "We can achieve nothing unless we use terror". The Bolsheviks rejected western ideas of legality in favour of their revolutionary justice - this meant that someone would be judged by their class, not by what they have done. Many people were executed simply for who they were, not for their deeds. Martin Latsis, chief of the Ukrainian Cheka, said - "Do not look in the file of incriminating evidence to see whether or not the accused rose up against the Soviets with arms or words. Ask him instead to which class he belongs, what is his background, his education, his profession. These are the questions that will determine the fate of the accused. That is the meaning and essence of the Red Terror". ...read more.

After Germany's surrender in November 1918, the Allies began to send aid to the White armies. Winston saw Bolshevism as a deadly threat to Western countries so was keen to destroy it. British Prime Minister Lloyd George was more sceptical - he said "Russia has never been conquered by a foreign foe, although it has been successfully invaded many times. It is a country which it is easy to get into, but very difficult to get out of". Britain sent �100,000,000 worth of equipment to the Whites but a lot of this was misused and some supplies also fell into the hands of the Red army. The Allies also suspected the political aims of the generals who came to dominate the White cause. Because of these factors in 1919, the Allies withdrew their troops and cut off aid to the Whites. There were many factors that led to the Bolsheviks winning the civil war. The leadership and organization of the party was far greater than the Whites. Lenin and Trotsky had to go against many things they believed in, but had to do this to try and help the country in the long run. Also the Bolsheviks used propaganda better, whereas the Whites did not value it as much which proved to be a mistake. Red terror was also an important factor, as the Red army had more chance of surviving by attacking poorly equipped against the whites than they did if they were to flee. The war was finally won in 1922, however the Bolsheviks would never fully heal from it. ...read more.