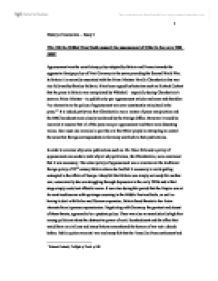 Why Did the British Mass Media support the appeasement of Hitler in the years 1933-1939?

History of Journalism - Essay 2 Why Did the British Mass Media support the appeasement of Hitler in the years 1933-1939? Appeasement was the conciliatory policy adopted by Britain and France towards the aggressive foreign policy of n**i Germany in the years preceding the Second World War. In Britain it is normally associated with the Prime Minister Neville Chamberlain but was also followed by Stanley Baldwin. It has been argued by historians such as Richard Cockett that the press in Britain was manipulated by Whitehall - especially during Chamberlain's years as Prime Minister - to publish only pro-appeasement articles and news and therefore "no alternative to the policy of appeasement was ever consistently articulated in the press."1 It is indeed partly true that Chamberlain was a master of press manipulation and the BBC broadcasts were closely monitored by the Foreign Office. However it would be incorrect to assume that all of the press was pro-appeasement and there were dissenting voices. ...read more.

Richard Cockett maintains that it was "due to the incestuous relationship between Whitehall and the press that developed during the 1930s that meant that the press could infact do nothing but help Chamberlain pursue appeasement."2 Cockett blames the lobby system on many journalists' willingness to follow Chamberlain's policy of appeasement. During Baldwin's premiership, ministers including Chamberlain had exclusive access to the lobby. Cockett points out that Chamberlain was adept at handling the lobby and that they were "honorary members of a power establishment and ex-officio members of a political system."3 Any journalists who expressed suspicions about Hitler's or Mussolini's intentions or Chamberlain's point of view would be excluded by Chamberlain from access to other news, as was the privilege of the lobby. In addition to the journalists, cabinet ministers had close relationships with editors and proprietors as well. Lord Halifax was close to Geoffrey Dawson the editor of The Times and Richard Cockett points out that throughout the 1930s, "Dawson was privy to more cabinet thinking and secrets than most members of the government... ...read more.