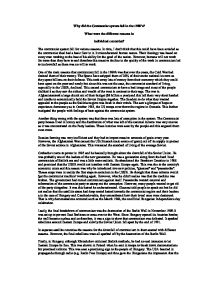 Why did the Communist system fail in the 1980's? What were the different reasons in individual countries?

Why did the Communist system fail in the 1980's? What were the different reasons in individual countries? The communist system fell for various reasons. In time, I don't think that this could have been avoided as the communist ideal had a basic flaw in it. It misunderstood human nature. Their ideology was based on every man working to the best of his ability for the good of the nation. However, humans will not work for more than they have to and therefore this massive decline in the quality of the work in communism led to its downfall as there was no will to work. One of the main reasons that communism fell in the 1980's was that over the years, the Cold War had drained them of their money. The Space Race stripped them of 20% of their entire national income as they spent billions on their defence. This took away lots of money from their economy which they could have spent on the poor and needy but since this was not the case, the communist standard of living, especially in the USSR, declined. This caused communism to have a bad image and most of the people disliked it as they saw the riches and wealth of the west in contrast to their rags. ...read more.

However, what he didn't realise was that the machine was broken. The government had turned communism against itself. Perestroika wanted renewal and reformation of the communist party to stamp out the corruption. However, many people wanted to get rid of the party altogether. It was this hatred he underestimated. Glasnost told people to speak out but he did not realise that the satellite states had deep rooted hatred towards the communist regime and their leaders a in the case of Hungary and Czechoslovakia, they remembered how their loved ones were destroyed. That is why demonstrations occurred such as the March 1986, the unofficial Hungarian Independence day celebration. Lastly, the final breakdown of communism was the destruction of the Berlin Wall in November 1989.It was set up to prevent East Berliners to cross over to the West. Since Hungary opened its Austrian border, the wall became useless and so therefore, it was a sign to show that communism was defeated. It sparked rebellions around Eastern Europe and slowly the Soviet Union fell apart by the end of 1991. In separate satellite countries the reasons for the downfall of communism in them started with different reasons. ...read more.

He was afraid that the Domino effect might work in reverse and what happens in Czechoslovakia might spread to the other satellite states. Therefore, the Brezhnev doctrine is born and even though he sent in troops to Czhechoslovakia, there was no bloodshed as they surrendered peacefully. So, the 'Prague Spring' brought the Brezhnev doctrine and a hard-line communist government. As you can see these countries were both brought back under the Soviet control through force. They both had reforms passed that the USSR did not like and were therefore responded to viciously. However, in the 1980's the USSR was in a great economic crisis. It did not have the money to deal with the uprisings as it did before. With the introduction of the new president (Gorbachev), who was realistic and knew that it was inadvisable to use the same tactics as his predecessors. They had just pulled out of Afghanistan, which cost them billions and received international condemnation. If they started to attack another country, to suppress the people, not only would it take a huge toll on the Soviet economy but the international image would be very shaken and could lead to confrontation. ...read more.