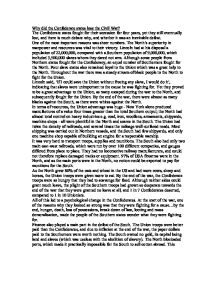 Why did the Confederate states lose the Civil War?

Why did the Confederate states lose the Civil War? The Confederate states fought for their secession for four years, yet they still eventually lost, and there is much debate why, and whether it was an inevitable defeat. One of the most important reasons was sheer numbers. The North's superiority in manpower and resources was vital to their victory. Lincoln had at his disposal a population of 22,000,000, compared with a Southern population of 9,000,000, which included 3,500,000 slaves whom they dared not arm. Although some people from Northern states fought for the Confederacy, an equal number of Southerners fought for the North. Four slave states also remained loyal to the Union which was a great help to the North. Throughout the war there was a steady stream of black people to the North to fight for the Union. Lincoln said, 'If I could save the Union without freeing any slave, I would do it', indicating that slaves were unimportant to the cause he was fighting for. ...read more.

All of this led to a psychological change in the Confederates. At the start of the war, one of the reasons why they looked so strong was that they were fighting for a cause...by the end, hunger, death, loss of possessions, break down of law, looting and mass demoralisation, made the people of the Southern states wonder what they were fighting for. Finance also played a main part in the defeat of the South. The Union troops were better paid than the Confederates, and due to inflation at the end of the war, the paper dollars paid to the Southerners were worth nothing. The South owned no gold, its capital being land and slaves (which was useless with the abolition of slavery). The North blockaded ports, which made it practically impossible for the South to sell cotton abroad. This poverty meant that transportation, food, munitions became much poorer quality, again putting the South at a great disadvantage. However, the ingenuity of many Southern officers compensated somewhat for their material disadvantages. ...read more.

Lincoln, on the other hand, was a masterful diplomat, prepared to overlook personal differences for the good of the Union. He never once faltered in his determination to save the Union, as we know by his statement made in August 1862 - 'My main aim in this struggle is to save the Union etc.' At the start of the war, the South had recruited and trained their troops better, winning the first Battle of Bull Run, and gaining victories throughout the first year of war. Yet by 1863, the Union general Ulysses S. Grant had a definite strategy, and managed to surround and overcome the Confederates, leaving the South in a state of devastation and defeat. Yet the outcome of the American Civil War was not a foregone conclusion. The North's larger population and superior resources were balanced by the geographical and strategic advantages of fighting on Southern soil. Lincoln's greater ability can be negated by the Confederacy's plentiful supply of experienced and competent generals. However, the South's inadequate government was no match for the North's pre-established, smooth running institution. This was a war of attrition - and in this type of war, the North with its superior numbers had to win. ...read more.