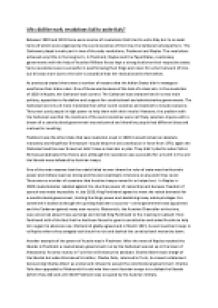 Why did the early revolutions fail to unite Italy?

﻿Why did the early revolutions fail to unite Italy? Between 1820 and 1831 there were a series of revolutions that tried to unite Italy but to no avail. Some of which were organised by the secret societies of the time; the Carbonari among others. The Carbonari played a main part in two of the early revolutions, Piedmont and Naples. The revolutions achieved very little in the long term, in Piedmont, Naples and the Papal States, reactionary governments with the help of Austrian Military forces kept a strong hold over their respective states. Some revolutions were successful in overthrowing their Kings and rulers for a short amount of time but this was more due to the ruler?s cowardice than the revolutionaries themselves. As previously stated there were a number of reasons that the Italian States didn?t manage to overthrow their state rulers. One of these was because of the lack of a clear aim. In the revolution of 1820 in Naples, the Carbonari took control. The Carbonari was characterised in to two main policies; opposition to feudalism and support for constitutional and administrative governments. The Carbonari were much more moderate than other secret societies and wanted to include everyone. They even used people in high power to help them with their revolts! However, the problem with the Carbonari was that the members of the secret societies were not finely selected. ...read more.

Charles Felix then appealed to Metternich for aid who then sent Austrian troops in to defeat the liberals (which they did) and until 1823 Piedmont was occupied by the Austrian military. Similar uprisings took place in the Papal States organised by people resentful of the Churches oppressive rule. The government of the Italian Provinces was formed in Bologna in 1831 but once more the force of the Austrian army was too much for the rebels and moved in to the Papal States and defeated the rebels. From then on minor uprisings were viciously supressed by Metternich?s army leading to more unsuccessful revolutions for the liberals. Most of the rebellions that took place were not lead by a clear leader and had a lack of organisation, this made it hard for people to know what to do and where to rebel. A prime example of this is Piedmont. The rebels started off being lead by the Carbonari which had gained many new members and was one of the larger secret societies. After Victor Emmanuel abdicated the throne, the Liberals turned to Charles Albert, second in line for the throne, who had successfully appointed a new government. The main problem was that Charles Albert wasn?t first in line for the throne; this made things difficult when Charles Felix, the rightful heir, returned to Piedmont and branded Charles Albert a rebel. ...read more.

However, the peasants of the Italian states didn?t take part in the revolutions because they didn?t mind what sort of governing body had charge over them and their state, as long as they had enough food to eat and a roof over their heads. The revolutions also lacked outside support from other countries to counter act the threat of Austria and Her military forces. Misely had hoped for support from the French King, Louis Philippe who had just been brought to power by a similar liberal revolution. He very quickly told the Italian revolutionaries that it was no business or responsibility of his to interfere with other countries affairs. Throughout the rest of Italy a policy of non intervention was adopted by all other States of Italy who argued that it was not in their own interest to fight for the cause of other Italians. And so, without the support of outside forces, the Italian states and revolutionaries had no chance of standing up to the Austrian Military. In conclusion, the revolutionaries had failed themselves because of a lack of aim, a clear leader, support and the fact that the Austrian army was just too strong. Italian nationalists could learn a great deal from the mistakes of their predecessors; to be more prepared, to have a clear and powerful leader and to have a military force strong enough to stand up to the Austrians. But, had early revolutions of Italy lead to a new and unified Italy in the long run? Or was Italy to stay merely a geographical expression? Rosie Johnson JK ...read more.