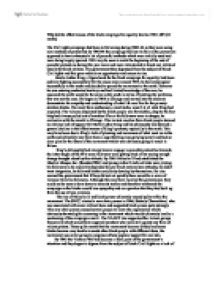 Why did the effectiveness of the black campaign for equality decline 1965-68?

Why did the effectiveness of the black campaign for equality decline 1965-68? (40 marks) The Civil rights campaign had been in full swing during 1960-64 as they were using new methods of protest but by 1965/66 the campaign had lost its flair as the protestors appeared to have exhausted a lot of peaceful methods which were initially used and were being largely ignored. 1965 may be seen to mark the beginning of the end of peaceful protests as during this year more and more riots started to break out, initiated usually by black citizens. The government then digressed from the subject of Black Civil rights and this gave radicals an opportunity and reason to rise. Martin Luther King, a figure head for the black campaign for equality, had been publicly fighting successfully for the cause since around 1955; he had campaigned successfully in the south and decided to spread the movement to the north. However he was entering uncharted territory and had limited knowledge of the area, he assumed the north would be the same as the south in terms of tackling the problems; this was not the case. ...read more.

King's philosophy had always been to engage in peaceful protest but towards the latter stages of the 60's some followers were getting tired of not seeing enough change brought about by this attitude. By 1965 Malcolm X had established the Muslim Mosque Inc. (founded 1964) and young radical black activists were joining his followers as he explicitly displayed his pro-black nationalism attitudes; he didn't want integration, he believed blacks could only develop by themselves. He also warned the government that if they did not act quickly there would be a wave of violence from his followers. Although this may have worried the government, they could not be seen to bow down to terrorist tactics and therefore weakened the campaign as the blacks would lose sympathy and co-operation that they had built up from the use of non-violence. The rise of Malcolm X and black power ultimately caused splits within the movement. The SNCC elected a new chair person in 1966, Stokely Charmichael, who was associated with more militant ideas and supported black power quite strongly. ...read more.

So as well as the strong hatred from white southerners, King now received a less than sympathetic reception from mainstream media; one newspaper even went as far as to say he had "diminished his usefulness to the cause." Without any support or positive coverage from the media, the campaign for equality couldn't be effective because their main methods involved using the media to expose hatred towards them therefore provoking sympathy. In spite of King's comments about Vietnam, it was unlikely he was going to receive any more American popular if he bad-mouthed their government. To conclude, in 1968 the movement lost their main figure head when King was assassinated at the age of 39. Following his death, the campaign didn't seem to progress any further; in fact it took a back step as there were over 100 riots after his death. Then in 1970 the SNCC, the main black civil rights organisation, ceased to exist. The effectiveness declined during 1965-68 mainly due to the campaigners own wrong doing and King stepping out of line, ultimately, they brought about their own campaigns demise! ...read more.