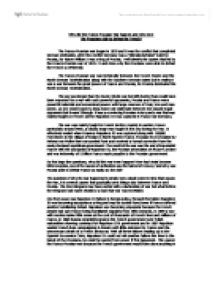 Why did the Franco-Prussian war happen and why were the Prussians able to defeat the French?

Why did the Franco-Prussian War happen and why were the Prussians able to defeat the French? The Franco-Prussian war began in 1870 and it was the conflict that completed German Unification, after this conflict Germany was a 'Kleindeutschland' ruled by Prussia, for Kaiser William I was a King of Prussia. I will identify the causes that led to the Franco-Prussian war of 1870-71 and show why the Prussians were able to defeat the French so efficiently. The Franco-Prussian war was technically between the French Empire and the North German Confederation along with the Southern German states but in reality it was a war between the great powers of France and Prussia, for Prussia dominated the North German Confederation. The war was longer than the Seven Weeks war but still shorter than would have been expected for a war with such powerful opponents, Prussia and France were powerful industrial and economical powers with large reserves of Coal, Iron and man power, so one would expect a long drawn out stalemate between two largely equal opponents but it wasn't though. It was a convincing Prussian victory and a war that was mainly fought on French soil for Napoleon III was captured in France not Germany. The war was mainly fought in French territory mainly in eastern France particularly around Metz, a b****y siege was fought in this city during the war. It effectively ended when Emperor Napoleon III was captured along with 150000 Frenchmen in the village of Sedan in North Eastern France. Prussian forces headed by Helmut von Molke then surrounded Paris and received a formal surrender from the newly declared republican government. The result of the war was the end of imperialist France with the usurpation of Napoleon III, the Prussian annexation of Alsace-Lorraine and war indemnity of 5 billion Francs made payable to the Prussian government. So this begs the questions, why did this war even happen? ...read more.

Austria did negotiate with France but decided not to support France because of the dangerous position she would placed in. Russia would not support France because France had interfered with Poland, on the side of Polish nationalism, and furthermore if the government of Russia had decided to support France then it would make them seem hypocritical because they were willing to ignore France over Poland but then fight for them against Prussia. Also Russia and Prussia had built up a friendly relationship since the 1850's this is due to Prussian and Russian co-operation over Poland and Russia keeping out of the Seven Weeks War. Also Russia was aiming to re-fortify the Black Sea therefore overturning the Black Sea clauses so a war with Prussia would not seem prudent because it would not regain the Black Sea for Russia. Although parts of Italy and France had been allies in a campaign against Austria in 1859, the Kingdom of Italy had allied with Prussia against Austria in 1866. This put Italy in an interesting position which of her former allies would she choose to become an enemy, in fact it was neither. Italy was pre-occupied by a French garrison in Rome which prevented Italian annexation of Rome. Italy would have supported France if she had removed the garrison but France blatantly refused, this was because it would seem like a further foreign policy failure for Napoleon III. As you can see France was pretty isolated in 1869, she had no friends or allies to call upon her to help defend her from the Prussians, this did not enable a Prussian victory but prevented a French one. Prussia had guaranteed once again that she would not be attacked by a coalition and therefore could concentrate all her offensive power on one state without the risk of being flanked. This isolation meant Prussia was able to defeat the French because there was no way Prussia would be outflanked by anyone as long as her power was concentrated against France. ...read more.

Succession Crisis and would have been cautious over the Ems telegram but the were quick and were blunt, this ended in the war. Without Bismarck's aims for the south German states there wouldn't have been a war because the Ems telegram would not have been altered and the declaration of war wouldn't have happened on 19th July 1870, but also if Bismarck's hadn't had the will to annex the south German states a war would have been pointless because it would have had no aim. The main reasons why the Prussians were able to defeat the French are; firstly an experienced and talented General Staff who knew how to use railways to their full advantage and secondly the railways themselves, Prussia had a better rail network and were able to exploit French weaknesses and mistakes quickly and punish them for them. Without the General Staff, Prussia probably wouldn't have won because they would have had a general staff who did not know how to use railways effectively and had experience doing so and without the railways themselves the war would have dragged on longer and would of probably ended in a French victory because France would have the advantage of being on French soil and being supplied more easily and also the Prussians wouldn't have been able to deploy as well as they did, this is the real key to why the Prussians won; because they deployed men precisely and effectively. As consequence to the Franco-Prussian war, the French lost Alsace-Lorraine for just under 50 years (until the Treaty of Versailles 1919) they also had to pay 5 billion Francs in war reparations, which was alot of money in 1871. Also through this war Bismarck was able to incorporate the south German states into the North German confederation and at Versailles the 2nd Reich was proclaimed with William I (Hohenzollen) as Kaiser and Bismarck as Chancellor. Therefore the Franco-Prussian war ended a series of unification wars that had plagued central Europe for 10 years. ...read more.