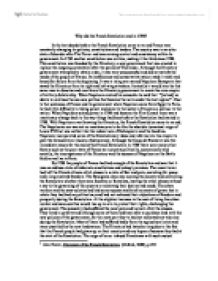 Why did the French Revolution end in 1799?

Why did the French Revolution end in 1799? In the last decade before the French Revolution came to an end France was constantly changing its policies, constitutions and leaders. The country was in an utter state of disorder after The Terror and was craving control and consistency within its government. In 1795 another constitution was written, making it the third since 1789. This constitution was founded by the Directory, a new government that was created to replace the outgoing convention after the period of Thermidor. Although the Directory government attempted to obtain order, it was very unsuccessful and did not satisfy the needs of the people of France. Its inefficiency and conservative nature made it weak and bound for failure from the beginning. It was a rising star named Napoleon Bonaparte that saved the Directory from its right and left wing attackers. Ironically it would later be this same man to dissolve and overthrow the Directory government to create his own empire of military dictatorship. When Napoleon created his consulate he said that "[he had] no desire to continue the see-saw politics that became the norm under the last regime"1. Due to the weakness of France and its government when Napoleon came from Egypt to Paris, he had little difficulty in taking power and came to the scene in France as a saviour to the nation. When Napoleon seized power in 1799 and became the First Consul there was a reactionary change back to the way things had been before the Revolution had started in 1789. ...read more.

The Directory multiplied its initiatives to organise a counteroffensive, but the elections were a success for the royalists all the same, people voted for a limited monarch. The regicides very alarmed lead to the Coup de Fructidor. They saved their skins by annulling the April election and preventing any royalists from gaining power. The Directory achieved this with assistance from the army and began to govern dictatorially. With the Directory in constant opposition by the left and right wing groups as well as the sans-culottes, and with the uprising in the Vendee, the Directory was at a loss and did not know what actions to take. They felt that they were becoming dangerously dependant upon the army and Napoleon and would be risking their safety to call upon him again.5 The Directory, to avoid being overthrown by Napoleon, placed him in command of the French army during the battles in Egypt. This led to the formation of the Second Coalition against France. In the spring of 1799 when the Austrians won victories in Bavaria and Lombardy, and Russia occupied all of northern Italy, the defeats accelerated the break-up of the Directory. In 1799 the Directory was very unpopular and a number of political leaders in Paris planned to overthrow the Directory government. Among these men were Talleryrand, Fouche and Sieyes. Sieyes, a leader of the Directory, invited Napoleon to be the leader of the new government and set up a system based on "confidence from below, power from above."6 They wanted a strong military figure like Napoleon who could restore the confidence of the people of France into the government. ...read more.

The orders had disappeared, and the separations that had been established among citizens had been abolished, although money became a new dividing restriction among the classes.13 When Napoleon seized power he found France in chaos. The Directory had been very unsuccessful in providing France with an adequate form of government and leadership. Under the constitution of 1795, the Directory tried to hold the Republic on a middle ground between equalitarian revolution and aristocratic-clerical-royalist reaction.14 With the constant attacks from the left and right wing groups the Directory was dependant upon Napoleon and the army putting itself in a vulnerable position to be overthrown. The Coup de Brumaire was achieved by Napoleon with ease and was a symbol of the Directory's failure to get to grips with the Revolution and that the French Revolution had come to an end. Napoleon, not wanting to be bogged down with democratic values, in which he would risk ending up like his predecessors, began his reign of an efficient military dictatorship. The Consulate, with Napoleon as first consul, was a reactionary change that gave an appearance of democracy. It preserved the main goals of the Constituent Assembly of 1789-1791 and was based on the power of the army. The principal reason that the French Revolution came to an end in 1799 was because of the rise of Napoleon. He was able overthrow the government and abolish the Revolution since France was paralysed by the Directory government and preceding governments, with their inability to provide France with a adequate leadership and support. Napoleon was the answer to France's the cry of help. He stabilized the country and enforced order France had long been without. ...read more.