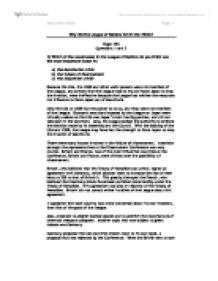 Why did the League of Nations fail in the 1930s?

Why did the League of Nations fail in the 1930s? Page: 254 Questions: 1 and 2 1) Which of the weaknesses in the League of Nations do you think was the most important factor in: a) the Manchurian crisis b) the failure of disarmament c) the Abyssinian crisis? Because the USA, the USSR and other world powers were not members of the League, any actions that the League took to try and force Japan to stop the invasion, were ineffective because the League had neither the resources nor influence to force Japan out of Manchuria. Only the USA or USSR had the power to do so, and they were not members of the League. Economic sanctions imposed by the League on Japan were virtually useless as the USA was Japan's main trading partner, and did not take part in the sanctions. Also, the League lacked the authority to enforce the decision made by its Assembly and the Council. With the backing of the USA and USSR, the League may have had the strength to force Japan to stop the invasion of Manchuria. There were many factors involved in the failure of disarmament. ...read more.

There was also concern that sanctions would damage the member countries' economy. The British cabinet was informed that 30,000 coal miners stood to lose their jobs because of a ban on coal exports to Italy. The League delayed the decision to ban oil sales to Italy for two months, which gave Mussolini eight weeks to build up his stockpile of raw materials. When the ban finally was put in place, it was too late, and to make matters worse, the Americans increased their exports to Italy during the League's blockade. Another crucial element of the League's failure, was the selfish actions of leading members of the League and their conservative actions. Britain and France both owned the Suez Canal, the main shipping route for supply ships to Mussolini in Abyssinia. Closure of the Canal would have cut off Mussolini from all support and ended the troubles very quickly. However, both countries were worried that doing so would have resulted in war with Italy. Equally damaging was the double dealing of Britain and France behind the scenes. In December 1935, while sanctions were being discusses, the h***e Laval Pact was formed with Italy between Britain and France. ...read more.

Once again the League deliberated over what action to take, allowing Mussolini to strengthen his position in Abyssinia. The League had no army to combat Italy, and its members were reluctant to help. Then, in 1936 Hitler marched his troops in to the Rhineland, in violation of the Treaty of Versailles, timing it with Mussolini in Italy. Later that year, the fatal blow to the League was delivered when Hitler and Mussolini signed the Rome-Berlin Axis, thus uniting Italy and Germany. During the 1920s, Europe was rebuilding itself after the ruins of the First World War; there were no countries in a position to fight a war. However, after the World Depression had ended, most countries in Europe had a strong enough economy to fight a war, and with the failure of disarmament and the League proving ever more futile, the relations between European countries became very fragile. Because of these reasons, I believe the League faced greater challenges during the 1930s because there was a very real possibility of war whereas during the 1920s, with the horrors of the First World War just past, war was unthinkable. However, with the state of invasions, alliances and relations in Europe and the world during the 1930s the League had to tread very carefully in order to avoid war. Matt Lewin 4SLW Page 1 ...read more.