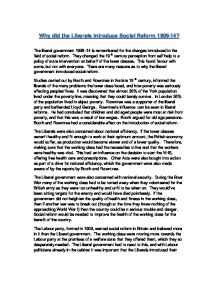 Why did the Liberals Introduce Social Reform 1906-14? The liberal government 1906-14 is remembered for the changes introduced in the field of social reform. They changed the 19th century perception from self help to a policy of state intervention on behalf of the lower classes. This found favour with some, but not with everyone. There are many reasons as to why the liberal government introduced social reform. Studies carried out by Booth and Rowntree in the late 19th century, informed the liberals of the many problems the lower class faced, and how poverty was seriously affecting peoples' lives. It was discovered that almost 30% of the York population lived under the poverty line, meaning that they could barely survive. In London 35% of the population lived in abject poverty. Rowntree was a supporter of the liberal party and befriended Lloyd George. Rowntree's influence can be seen in liberal reforms. He had concluded that children and old aged people were most at risk from poverty, and that this was a result of low wages. ...read more.

They would've been sitting targets for the enemy and would have died pointlessly. If the government did not heighten the quality of health and fitness in the working class, then if another war was to break out (though at the time they knew nothing of the approaching World War I) then the country could be n serious trouble and danger. Social reform would be needed to improve the health of the working class for the benefit of the country. The Labour party, formed in 1900, wanted social reform in Britain and believed more in it than the Liberal government. The working class were moving more towards the Labour party at the promises of a welfare state that they offered them, which they so desperately needed. The Liberal government had to react to this, and with Labour politicians already in the cabinet it was important that the Liberals introduced their own regime of state intervention to maintain votes and supporters from the working class. ...read more.

The Liberals had capitalised on the exhausted Conservative party and to win the election they offered Britain a 'new look' Liberalism party. One of the newest additions to the Liberal party's policies was the promise of social reform. The Liberal party had previously always supported self help. When they came into office they had to fulfil their promises to the people and so social reform started to be introduced. In conclusion, one can conclude that social reform was brought about by many factors. Due to the demand for social reform from the people of Britain and the factors that showed a need for state invention the Liberals had little choice but to introduce some state of social reform in the country. Many of their original ideas can still be seen today and was the foundation of the Welfare State that we now live in. It greatly benefitted the country. These social reforms benefitted the working class and reduced poverty in Britain. It was one of the last great acts by the Liberal party. ?? ?? ?? ?? ...read more.