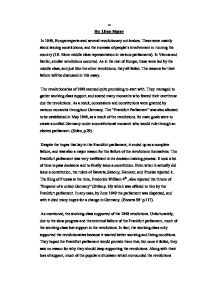 Why Did the Revolutionaries of 1848 Achieve so Little in Germany?

Why Did the Revolutionaries of 1848 Achieve so Little in Germany? By: Liran Morav In 1848, Europe experienced several revolutionary out brakes. These were mainly about issuing constitutions, and the increase of people's involvement in running the country (I.E. More middle class representation in various parliaments). In Vienna and Berlin, similar revolutions occurred. As in the rest of Europe, these were led by the middle class, and just like the other revolutions, they all failed. The reasons for their failure will be discussed in this essay. The revolutionaries of 1848 seemed quite promising to start with. They managed to gather working class support, and scared many monarchs who feared their overthrow due the revolutions. As a result, concessions and constitutions were granted by various monarchs throughout Germany. The "Frankfurt Parliament" was also allowed to be established in May 1848, as a result of the revolutions. Its main goals were to create a unified Germany under a constitutional monarch who would rule through an elected parliament. (Stiles, p.29). Despite the hopes that lay in the Frankfurt parliament, it ended up as a complete failure, and was also a major reason for the failure of the revolutions themselves. ...read more.

Some revolutionaries even questioned whether actual unification was necessary. These disagreements weakened the unity among the revolutionaries, and made the revolutions more vulnerable to monarchs' opposition and eventual full regain of power. (www.Britannica.co.uk- "Frankfurt Parliament") The middle class revolutionaries also lacked of power when they conducted the revolutions. Most of the revolutions were actually peaceful demonstrations and petitions. If the revolutionaries would of used violent uprisings as their weapon, the picture would've looked very different in the eyes of the monarchs. For instance, when a violent upheaval occurred in Berlin, where clashes took place between the king's army and the demonstrators in March 1848, the king quickly appealed for peace and agreed to some of the demands for reforms, and to the demand of a written constitution. Nevertheless, Berlin was an exception in the revolutions of 1848-49, and with hardly any "Iron and Blood" (Bismarck, 1862. Stiles p. 52), the revolutions had little chances of bringing about efficient concessions and reforms. (Stiles p.39) The lack of nobility support, although not very significant, was also one of the factors that led to the failure of the 1848 revolutionaries. The revolutionaries never actually tried to gather the nobility into supporting the revolutions. ...read more.

After the monarchs withdrew their support from the revolution, the revolutionaries found themselves having to face more and more enemies. Each with a well equipped and organized army ready to suppress any revolutionary activities. (Stiles p.38) The main reason, however, for the failure of the 1848 revolutions was that the enemy was stronger, and held control over the army. All the monarchs had to do was to wait until popular enthusiasm was reduced, and then regain control using their army. Once back in control, they abolished the constitutions they issued, and cancelled all reforms they made. In this aspect, Austria played the biggest role. After it suppressed its own revolts (e.g. the Vienna uprising in March 1848), it helped other monarchies suppress theirs. Until it wasn't defeated in one way or another, popular revolutions would never have a chance of changing anything within German borders. (Stiles p.38 + Encarta 98' p.117). Overall, when looking back at the revolutions of 1848-49, it's evident they were destined to fail. The revolutions were only short - lived moments of enthusiasm, with no real future. There were too many factors which "Pre - ensured" their failure. There is, however, one benefit the revolutionaries created. They made the Germans aware of their individuality, and of the need for a unified Germany. This awareness remained until Germany was finally unified in 1871. ...read more.