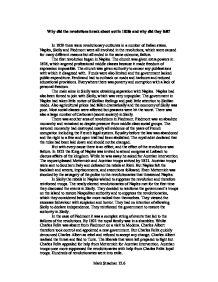 Why did the revolutions break about out in 1820s and why did they fail?

Why did the revolutions break about out in 1820s and why did they fail? In 1820 there were revolutionary outbursts in a number of Italian states. Naples, Sicily and Piedmont were all involved in the revolutions, which were caused for many different reasons but all ended in the same outcome, failure. The first revolution began in Naples. The church was given extra powers in 1818, which angered professional middle classes because it made freedom of expression impossible. The church was given authority to censor any publications with which it disagreed with. Funds were also limited and the government lacked public expenditure. Ferdinand had to cut back on roads and harbours and reduced educational provisions. Everywhere there was poverty and corruption with a lack of personal freedom. ...read more.

But with every cause there is an effect, and the effect of the revolutions was failure. In 1821 the King of Naples was invited to attend congress at Laibach to discuss affairs of the kingdom. While he was away he asked for Austrian intervention. The request pleased Metternich and Austrian troops arrived by 1821. Austrian troops were sent to Southern Italy and defeated the rebels at Rieti. But Naples felt the backlash and arrests, imprisonments, and executions followed. Even Metternich was shocked by the savagery of the police to the revolutionaries that threatened Naples. In Sicily the rebels in Naples wished to suppress the revolution and therefore reinforced troops. The newly elected revolutionaries of Naples met for the first time they discussed the events in Sicily. ...read more.

Hundreds of revolutionaries went into exile. To conclude there were many reasons that were the catalyst for the revolutionaries in the 1820s. Causes included the activities of the secret societies such as the Carbonari, the birth of Italian nationalism and dislike of Austria's domination of the peninsula. But the main cause was dislike of restored autocratic rulers and wanting the independence govern themselves without a dictatorship. The reasons for failure are also differ, which include the weakness in the secret societies and the revolutionaries not sticking together. But the most overwhelmingly most important hindrance of the revolutions was the Austrian intervention. As soon as the revolution became to strong for the Kings to handle they always had the power to ask for help from the dominant Austria, which was therefore the foremost facto for the failures of the revolutions. Mark Strachan 12.6 ...read more.