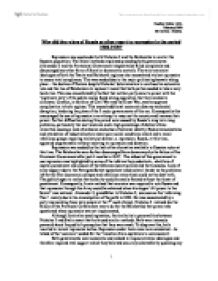 Why did the rulers of Russia so often resort to repression in the period 1900-1929?

Why did the rulers of Russia so often resort to repression in the period 1900-1929? Repression was used under both Nicholas 2 and the Bolsheviks to control the Russian population. The liberal methods employed preceding both governments (Alexander 2 and the Provisional Government respectively) failed completely and discouraged any other form of liberal or democratic controls. The strict extremist ideologies of both the Tsarist and Bolshevik regimes also necessitated violent repression to ensure total compliance. This was needed due to the major political upheavals taking place - the decline of Tsarism despite Nicholas' determination to continue his autocratic rule and the rise of Bolshevism to replace it meant that both parties needed to take a very harsh line. This was exacerbated by the fact that neither party came to power with the 'legitimate vote' of the public and so faced strong opposition that they wished to eliminate. Conflict, in the form of Civil War and the Great War, was an apparent complication in both regimes. This caused additional economic disarray and social disruption, hindering the plans of the 2 major governments of this era. Consequently this encouraged the use of repression in an attempt to resurrect the country and increase their power. Further difficulties during this period were caused by Russia's long term long problems, particularly the vast land area and a high percentage of distinct ethnic minorities causing a lack of cohesion and sense of national identity. ...read more.

Important ministers were often associated with the Church e.g. Pobiedonotstev. After the downfall of Tsarism, Lenin proclaimed the Marxist theory that religion was 'the opium of the people' and proceeded to turn repression onto the church to rid Russia of this perceived powerful opponent to the communist system. Stalin continued the destruction of religion in Russia through the assassination of any cleric he felt had too much influence. The Tsar and the Bolsheviks both faced threatening opposition. The Tsar's opponents ranged from the peasant-based Social Revolutionaries (who would later become the Bolsheviks opponents) to the Bolsheviks themselves - supported by the working class. The failure of the 1905 revolution after the intervention of the Okhrana and army showed that the Tsar could not have retained power without repression. The Okhrana were also used to rid Russia of revolutionaries - such as Lenin himself. The Bolsheviks shared the problems caused by the ethnic minorities and their wish for independence. However, The Treaty of Brest-Litovsk weakened this opposition for the Bolsheviks after it removed 25% of Russian land - mainly that housing the minorities. Both regimes faced a wide range of opposition, prompting repression to remove the greatest threats - such as the dissolution of the SR-dominated constitution in 1918. Lenin reduced the power of the elite by taking their property and institutions from them. ...read more.

Until the fall of communism in Russia in the late 20th century, it was clearly evident that the more lenient governments, such as that of Alexander 2 and Provisional Government were less successful than the more repressive ones although they were hardly given chance to do well, so quick were some to take their place at the first sign of weakness. This acted as an encouragement for the major governments between 1900-1929 to use the secret police, army and threat of imprisonment to deter opposition, repress the peasantry and enforce the ideologies of the government. Repression was imperative for both governments; the Tsarist to cling to power and the Communists to s****h it from them. Both had many unpopular economic, political and social reforms to pass. War highlighted the problems of the country and the presence of strong opposition against both governments. In the view of both it increased the need for repression to realign the economic and social structure. Under both regimes the cause and the effect of repression was the same; it resulted in the death or displacement of many. Unfortunately, it was just a prelude to the terror that was to be experienced during the 'High-Stalinism' of the 1930's. During this decade, 7 million died, mostly after being sent to a labour camp for failing to conform to the Communist ideal of 'collectivisation'. Heather Dodds L62A February 2000 Mr Davies - History. 1 ...read more.