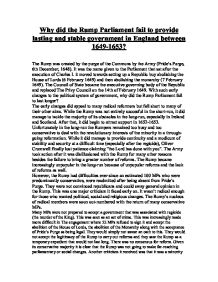 Why did the Rump Parliament fail to provide lasting and stable government in England between 1649-1653?

Why did the Rump Parliament fail to provide lasting and stable government in England between 1649-1653? The Rump was created by the purge of the Commons by the Army (Pride's Purge, 6th December, 1648). It was the name given to the Parliament that sat after the execution of Charles I. it moved towards setting up a Republic buy abolishing the House of Lords (6 February 1649) and then abolishing the monarchy (7 February 1649). The Council of State became the executive governing body of the Republic and replaced The Privy Council on the 14th of February 1649. With such early changes to the political system of government, why did the Rump Parliament fail to last longer? The early changes did appeal to many radical reformers but fell short to many of their other aims. While the Rump was not entirely succesful in the short-run, it did manage to tackle the majority of its obstacles in the long-run, especially in Ireland and Scotland. After that, it did begin to attract support in 1652-1653. Unfortunately in the long-run the Rumpers remained too busy and too conservative to deal with the revolutionary interests of the minority in a through-going reformation. While it did manage to provide continuity and a modicum of stability and security at a difficult time (especially after the regicide), Oliver Cromwell finally lost patience claiming "the Lord has done with you". ...read more.

This was a massive task that made progress to constitutional refroms a laborious process because of the increased workloads. In addition, after the new republic was declared, it faced many enemies. Royalists had no real love for it and Presbyterians had very little. The Rump was pressurised by the army but even the army was a potential enemy because many soldiers were still owed large sums of back pay. Many regiments mutinied until arrears were eventually paid by 1650. The Army also wanted to see reforms. They wanted laws to be more accessible and break the monopoly in the legal profession. Given that there were fourty-four lawyers in the House, there would not be drastic changes to the legal establishment. Also, given that the Rump represented commercial interests, it was unlikely they would abolish the privileges of big corporations or monopalies that the radical elements of the army and the Levellers hated. This would cause increased frustration to the Army who also desired a new constitution and social reforms to include a more representative form of government. There were 211 MPs in the Rump. 70 would attend the sitting, but the composition and number of MPs who were active meant it was unrepresentative at that level. On 14 May Cromwell and Fairfax took a body of mutineers at Burford by surprise, captured 300 in the night. Only three mutineers were shot. ...read more.

By 1649 more radical left-wing groups such as the True Levellers or Diggers and religious sects such as the Fifth Monarchists, Ranters and Quakers seemed to overshadow the Leveller cause. They overrode all considerations of law, conventional morality and religion. This could be a barrier to sustainable progress for the Rump who were alarmed at the situation. Fortunately for the Rump Parliament, though these groups attracted many people, they were too fragmented to prove any effective threat to the regime. It is argued their existence made the Rump more conservative. The establishment of the republican Commonwealth in 1649 would cause a more godly society to emerge and justify the revolution had caused a multitude of radical religious and secular proposals which eventually fell on deaf Rumpers ears. The Rump wanted to contain the spread of radicalism. This would mean the Rump would not authorise complete religious toleration. With such a vast number of obstacles to deal with, the Rump did have achievements. This is because the Commonwealth government functioned successfully-collecting taxes, upholding property and keeping the peace in very difficult circumstances. England became powerful in European politics and trade and colonial interests flourished under the republic. The Rump also successfully 'reinvented' the English political landscape. There were many administrive chnages and the civil aervice was founded. The Rump buiilt up the navy and by 1652 there were 100 warships. The wars forced the governments to modernize and in 1649 the Rump needed force to deal with Ireland and Scotland. ...read more.