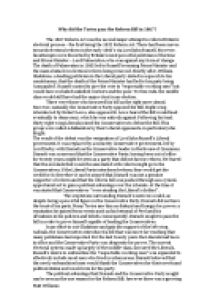 Why did the Tories pass the Reform Bill in 1867?

﻿Why did the Tories pass the Reform Bill in 1867? The 1867 Reform Act was the second major attempt to reform Britain?s electoral process ? the first being the 1832 Reform Act. There had been moves towards electoral reform in the early 1860?s via Lord John Russell. However, his attempts were thwarted by Britain?s most powerful politician of the time and Prime Minister ? Lord Palmerston, who was against any form of change. The death of Palmerston in 1865 led to Russell becoming Prime Minister and the main obstacle in electoral reform being removed. Shortly after, William Gladstone; a leading politician in the Liberal party stated in a speech to his constituency, that the death of the Prime Minister had led to his party being ?unmuzzled?. Russell wanted to give the vote to ?respectable working men? but would have excluded unskilled workers and the poor. To this ends, the middle class would still have had the major clout in an election. There were those who favoured his bill as the right move ahead. However, naturally the Conservative Party opposed the Bill. Right-wing Liberals, led by Robert Lowe, also opposed it. ...read more.

The support of the working-class towards the ?democratic? North in the Civil War persuaded the government that they had a ?moral conscience? and were not the unruly mob they had once thought and that now they had shown they deserved the right to vote. The Reform union and the Reform League further supported this theory. The pro-reform groups had similar aims but differed in their category of support. The Reform League was mainly a working-class organisation, which wanted universal manhood suffrage. On the other hand, the Reform Union was a mainly middle-class organisation, which amongst other aims, supported the extension of the right to vote to most adult males. These groups held demonstrations of up to 100,000 people at a time to put pressure on the government. Such demonstrations showed both the responsibility of the artisans and the risk of them rioting. Within weeks of taking office, the Conservatives were faced with a political riot in Hyde Park. A meeting by the Reform League ended in a major riot when the police attempted to prevent the meeting taking place. The event caused great alarm, many fearing a return to the revolutionary activity associated with the Great Reform Bill crisis of 1830-32. ...read more.

When answering ?Why the Tories passed the Reform Bill in 1867?? it can be argued that the tenacity and motives of Benjamin Disraeli are as much a reason as the Conservative Party itself. It would be wrong to assume that Disraeli was primarily motivated by the threat of popular pressure. Many ascribe his main motive as entirely party political: destroy Gladstone, consolidate middle class opinion behind the Conservatives, thus keeping the Tories in power, but above all else, strengthen his own position in the party. However, the Conservatives had been out of office for twenty years and many were desperate for power. The split of the Liberals provided the Conservatives with the political opportunity to regain popularity. Many politicians at the time had realised that reform was inevitable and so cynically, sought to be seen in favour of change, in order to gain a political advantage; a view adopted predominantly by Disraeli and the Conservatives. The Tories can also be seen, however to be bowing to popular pressure. At the time there was a growing consensus for reform and organisations such as the Reform Union and Reform League added additional weight to the widespread calling for parliamentary reform. Consequently, from both perspectives, it appears that the Conservatives? Reform Bill was proposed to appease the people and to regain popularity. Matt Williams ...read more.