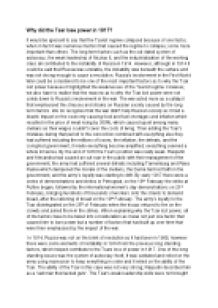 ﻿Why did the Tsar lose power in 1917? It would be ignorant to say that the Tsarist regime collapsed because of one factor, when in fact it was numerous factors that caused the regime to collapse; some more important than others. The long term factors such as the out dated system of autocracy, the weak leadership of Nicolas II, and the industrialisation of the working class all contributed to the instability of Russia in 1914. However, although in 1914 it could be said that Russia was unstable, the instability was beneath the surface and was not strong enough to cause a revolution. Russia?s involvement in the First World War could be considered to be one of the most important factors as to why the Tsar lost power because it highlighted the weaknesses of the Tsarist regime. However, we also have to realise that the reasons as to why the Tsar lost power were not solely down to Russia?s involvement in the war. The war acted more as a catalyst that emphasised the stresses and strains on Russian society caused by the long term factors. We do recognise that the war didn?t help Russian society as it had a drastic impact on the economy causing food and fuel shortages and inflation which resulted in the price of meat rising by 300%, which caused upset among many civilians as their wages couldn?t cover the costs of living. ...read more.

war the Tsar?s position would not be safe because the expenditures the war required would have had a disastrous affect on the economy resulting in discontentment among the civilians. When the war began in 1914 everyone pulled together to support their country, the sale of vodka was banned in order to produce more artillery equipment. However the defeats at Tannenburg (August 1914), Masurian Lakes (September 1914) Rava Ruska and Brusseloffensive heavily impacted Russian society, it killed everyone?s optimism and dampened morale. These two defeats resulted in the loss of hundreds of thousands of soldiers; in the first year Russia lost 4 million men. This helped change the composition of the army because the loyal soldiers had been killed off and were being replaced by angry disloyal peasants. As the peasants were becoming the new soldiers they were more susceptible to the revolutionary groups as they were more impressionable, and didn?t care much for the Tsar. They were also less trained which meant that the army as a force was becoming weaker. The military were nowhere near ready for war in 1914. Pipes said ?politically, economically and socially the institutions were incapable of meeting the demands of war? in other words Russia was in no financial state to accommodate the costs of war. ...read more.

Thus resulting in hundreds of thousands of people taking to the streets. The Tsar was away whilst all of this was happening and received a letter from Alexandra telling him to come back, he ordered the army to fire on the crowds. On the 25th the army fired on the crowd, however on the 26th of February most of the soldiers refused to fire on the crowds and joined them. As the Tsar was trying to make his way back to Petrograd his line was blocked by disloyal troops who were ordering him to step down as Tsar. Nicolas didn?t want to step down in favour of his son because on his son?s condition, so he decided to step down in favour of his brother. However his brother didn?t want the responsibility and no Nicolas II abdicated on the 2nd March 1917 and that was the end of the Romanov Dynasty. The regime collapsed it was not overthrown. The long term factors had built up and when the short term factors and immediate factors were added it was all too much for the regime to up hold, and so it caved in on itself. In conclusion the Tsar power in 1917 due to a number of reasons, not just one. The regime collapsed because of the effects of the long term factors, the impact of the short term and immediate factors. ...read more.