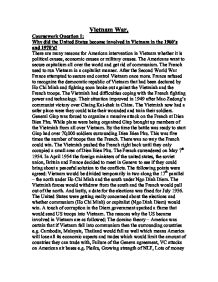 Vietnam War. Coursework Question 1: Why did the United States become involved in Vietnam in the 1960's and 1970's? There are many reasons for American intervention in Vietnam whether it is political causes, economic causes or military causes. The Americans want to secure capitalism all over the world and get rid of communism. The French used to run Vietnam in a capitalist manner. After the Second World War France attempted to secure and control Vietnam once more. France refused to recognize the democratic republic of Vietnam that had been declared by Ho Chi Minh and fighting soon broke out against the Vietminh and the French troops. The Vietminh had difficulties coping with the French fighting power and technology. Their situation improved in 1949 after Mao Zedong's communist victory over Chaing Kai-shek in China. The Vietminh now had a safer place were they could take their wounded and train their soldiers. ...read more.

Cambodia, Malaysia, Thailand would fall as well which means America will lose all its economic aspects and trades which would limit the amount of countries they can trade with, Failure of the Geneva agreement, VC attacks on American air bases e.g. Pleiku, Growing strength of NLF, Lots of money in south Vietnam (funding into Diems army), Failure of US advisors, collapse of French Indo-China, Failure of strategic hamlets, American fear of communism and US weapons manufacturers saw a market for their products developing. The US tried all sorts of methods to crack down and rid Vietnam of communism. Strategic hamlets are little American secured hamlets which peasants around South Vietnam were put into to live. The aim for this was to secure capitalism in these villages. This proved a failure as the Vietcong (communist from the North) slipped in to these and were preaching the word of communism to other villagers at their discretion. ...read more.

Limitations of operation rolling thunder - the result of the self imposed restrictions of 'rolling thunder' was that large safe areas were created which protected 80% of North Vietnams industry and 75% of its population. In December 1964, 16,000 US troops were in Vietnam. Lieutenant General William Westmoreland in control of marines and ARVN. In 1966 268,000 US troops were in Vietnam. By 1968 over half a million US troops in Vietnam. In 1963 Lyndon B. Johnson takes over presidency in America after John F. Kennedy was murdered in Dallas. Lyndon describes the war as "the biggest damn mess I ever saw!" the Vietcong continue to attack the ARVN. More supplies were coming from the North. The capitalist republic appeared threatened. America became heavily involved in both air and ground war where their technological superiority would be tested to the full extent against a determined and resourceful enemy intent on removing all foreign influence from their native country. ...read more.