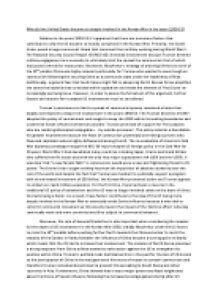 Why did the United States become so deeply involved in the Korean War in the years 1950-53?

﻿Why did the United States become so deeply involved in the Korean War in the years 1950-53? Relative to the years 1950-53 it?s apparent that there are numerous factors that contribute to why the US became so heavily comprised in the Korean War. Primarily, the Soviet Union posed a huge communist threat that stemmed from military uprising during World War II. The National Security Council Report 68 (NSC-68) increased involvement because Truman deemed military engagement as a necessity to ultimately limit the spread the communism that of which had posed a threat for many years. Moreover, MacArthur?s strategy of ordering UN forces north of the 38th parallel China was highly relevant particularly for Truman who wanted to seem tough on communism following the securing China as a communist state under the leadership of Mao. Additionally, a general fear that South Korea might fall to advancing North Korean forces amplified the sense the hysteria that co-existed within capitalism and made the element of ?Red Scare? an increasingly worrying issue. However, in order to assess the full extent of this argument, further factors and reasons for increased US involvement must be considered. Truman?s persistence to limit to spread of communist tyranny remained a factor that largely contributed to deeper US involvement in the years 1950-53. ...read more.

Initially MacArthur order the US forces to cross the 38th parallel before pushing further North towards the Chinese border to resist the tenacity of the Soviets in Korea however the influence of China became a turning point militarily which meant that the US had to increase their involvement. The invasion of North Korea provoked a strong response from China as Mao wanted to take action against the US to strengthen his position within China. Truman?s political rivals had blamed him in the past for the loss of China and so the participation of China in the war gave even him more of reason to contain communism and therefore Truman remained determined to prevent this spreading to South Korea and other countries in Asia. Furthermore, China showed that it was a major power and fears heightened about the future of Soviet influence following the increased prestige gained shortly after US troops were forced to retreat. The US didn?t want to be deemed as a weak force and were willing to uphold their reputation as the world?s policeman for international affairs. General Ridgeway managed to fulfil this aim as he stopped the retreat of the US army and counterattacked the Chinese- pushing communists back to the 38th parallel before the war became a stalemate. ...read more.

MacArthur was keen to destroy communism and Truman wanted to show that he was tough on communism to help his party in the November elections. The US and South Korea also wanted revenge for the atrocities carried against civilians. As a result, the connotations of this are that the US did become so deeply involved because they felt a need to use more stern measures to avenge those contributing to the spread of communism. To conclude, there are many factors that contribute to why the US became so deeply involved in the Korean War in the year 1950-53. The Truman Doctrine and introduction of the NSC-68 sought to limit and contain the spread of communism as this was a growing problem, increasing since the USSR became a superpower following the Second World War. Truman?s criticisms following the securing of Mao?s China as a communist state furthered US involvement as he persisted to prevent any further Soviet influence corrupting other countries is Asia. Furthermore weaknesses in the Soviet regimes increased anger for communist opponents and discussions of ?rolling-back? communism were heavily favoured by the US, hence why they became so deeply involved. As a whole, all these factors tie together to show how the United States became so deeply involved in the Korean War as they all reflect the need for further resistance against communism by the US. ...read more.