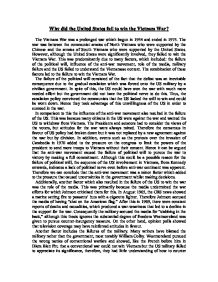 Why did the United States fail to win the Vietnam War?

Why did the United States fail to win the Vietnam War? The Vietnam War was a prolonged war which begun in 1954 and ended in 1975. The war was between the communist armies of North Vietnam who were supported by the Chinese and the armies of South Vietnam who were supported by the United States. However, although the United States were significantly involved, they failed to win the Vietnam War. This was predominantly due to many factors, which included: the failure of the political will, influence of the anti-war movement, role of the media, military failure and the US failed to understand the Vietnamese context. The combination of these factors led to the failure to win the Vietnam War. The failure of the political will consisted of the fact that the defeat was an inevitable consequence due to the gradual escalation which was forced onto the US military by a civilian government. In spite of this, the US could have won the war with much more needed effort but the government did not have the political nerve to do this. ...read more.

Therefore we can conclude that the anti-war movement was a minor factor which added to the pressure that caused uncertainties in the government whilst making decisions. Additionally, another factor which also resulted in the failure of the US to win the war was the role of the media. This was primarily because the media undermined the war efforts for which Johnson criticised them for this. In August 1965, the CBS news showed a marine setting fire to peasants' huts with a cigarette lighter. Therefore Johnson accused the media of having "shat on the American flag." After this in 1969, there were constant reports of deaths and causalities, which produced a war-weariness that led to a decline in the support for the war. Consequently the military accused the media for "stabbing in the back," although this thesis ignores the substantial degree of freedom Westmoreland was given to pursue counter-insurgency measure. On the other hand, opinion polls showed that television coverage may have reinforced attitudes in favour. Another factor includes the failures of the military. Many writers have blamed the military rather than the government, most notably William Colby. ...read more.

They should have seen it as a powerful home of nationalism which in practice, was. In addition, the US government also ignored the attraction of Communism mainly from people who had previously been exploited economically and were living in unendurable conditions. Furthermore the US failed to win the support of the South Vietnamese people and, in many respects, fuelled their nationalism and support for the Vietcong. They ignored the Vietnamese culture and past traditions by placing too much emphasis on the Cold War, which was an issue of little importance or understanding to the majority of the population. This resulted in the USA not being able to win the hearts and minds of the South Vietnamese people. The failure of the US to in the war in Vietnam were therefore due to various factors such as the failure of the political will, influence of the anti-war movement, role of the media, military failure and the failure to understand the Vietnamese context.. But none of these can be taken into account on their own in order to say which was the most important as the amalgamation of all these factors led to the defeat of the US in Vietnam. ?? ?? ?? ?? ...read more.