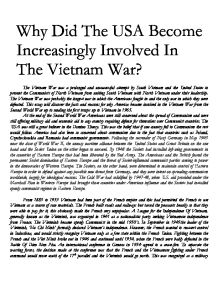 Why Did The USA Become Increasingly Involved In The Vietnam War?

Why Did The USA Become Increasingly Involved In The Vietnam War? The Vietnam War was a prolonged and unsuccessful attempt by South Vietnam and the United States to prevent the Communists of North Vietnam from uniting South Vietnam with North Vietnam under their leadership. The Vietnam War was probably the longest war in which the Americans fought in and the only war in which they were defeated. This essay will discover the facts and reasons for why America became involved in the Vietnam War from the Second World War up to sending the first troops up to Vietnam in 1965. At the end of the Second World War Americans were still concerned about the spread of Communism and were still offering military aid and economic aid to any country requiring defense for themselves over Communist countries. The USA was still a great believer in the Domino Theory. This was the belief that if one country fell to Communism the rest would follow. America had also been so concerned about communism due to the fact that countries such as Poland, Czechoslovakia and Romania had communist governments. ...read more.

North Vietnam expected to win this election thanks due to the broad political organization that it had built up in both parts of Vietnam. But President Diem, who had set his control over South Vietnam, refused in 1956 to hold the scheduled elections. The United States supported his position as South Vietnam was a Non-communist country and they feared that if the elections were held and North Vietnam won, then the whole of Vietnam and quite possibly the whole of Asia was certain to become Communist. In response, the North Vietnamese decided to unify south with North Vietnam through military force rather than by political means. The US secretary of State 'John Foster Dulles', fearing the spread of communism in Asia, persuaded the US government to provide economic and military assistance to the Diem regime. However Diem became increasingly unpopular with the people of Vietnam as he aroused the anger of the Buddhists by selecting fellow Roman Catholics (most of whom had moved from North to south Vietnam) for top government positions. Guerilla warfare spread as Vietminh soldiers who were trained and armed in the North, returned to their homes in the South to assassinate, ambush, sabotage and proselytize. ...read more.

The Viet Cong attacked the US base at Pleiku, killing 8 soldiers and wounding 126 more on the night of February 7th. Johnson in response ordered another payback bombing of North Vietnam. Three days later the Viet Cong raided another US military installation at Qui Neon, and Johnson ordered more aerial attacks against Hanoi. In my conclusion I believe that the Presidents of the USA during that time were most responsible for the attacks, and the great outbreaks of war. The main idea behind America's involvement in the war was mainly to try and contain the spread of Communism. Although historians say that it was also an act to protect the independence of Vietnam I believe it was a selfish pretense used as an excuse to destroy more Communists. I think the whole war could have just been avoided if countries just stuck to their own leaders and ideologies. That way there would be no arguments over who owned who etc. I think that the main turning points in the war was when Kennedy and Diem were assassinated, because that is the point where people could have stood up and said "That's it, it's over". Why Did The USA Become Increasingly Involved In The Vietnam War? ?? ?? ?? ?? ...read more.

The author has a good amount of knowledge but much of the essay is narrative, with only implicit links to the question. When the points are linked to the question, this is high quality but this is not done consistently throughout