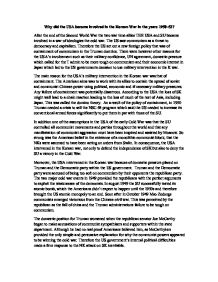 Why did the USA become involved in the Korean War in the years 1950-53?

Why did the USA become involved in the Korean War in the years 1950-53? After the end of the Second World War the two war time allies THE USA and SU became involved in a war of ideologies the cold war. The US saw communism as a threat to democracy and capitalism. Therefore the US set out a new foreign policy that was of containment of communism in the Truman doctrine. There were however other reasons for the USA's involvement such as their military confidence, UN agreement, domestic pressure which called for the T admin to be more tough on communism and their economic interest in Japan which led to the US governments decision to use military intervention in the K war. The main reason for the USA's military intervention in the Korean war was that of containment. The American aims was to work with its allies to contain the spread of soviet and communist Chinese power using political, economic and if necessary military pressures. ...read more.

Soon after in October 1949 Mao Zedongs communists emerged victorious from the Chinese civil war. This was perceived by the republican as the fall of china and the Truman administrations failure to be tough on communism. The domestic position for Truman worsened when the republican senator Joe McCarthy began to make accusations of communist sympathisers and supporters within the state department. Although he had no real proof Americans believed him, as McCarthyism provided the only simple and persuasive explanation for why the communist powers appeared to be winning the cold war. Therefore the US government's internal political difficulties made a firm response to the NK attack on SK inevitable. The cold was a war of ideologies. USA felt threatened by communism and thought communist SU was out to destroy democracy and capitalism. Therefore was prepared to defend free countries from aggressive communist countries. However the US supported Syngman Rhee who's regime was hardly a model of freedom and democracy. ...read more.

Due to the fact that korea was a peninsula it was thought that the war would be winnable with low costs as it would be easy to project Naval and aerial power. Trumans airforce advisers had convinced him that Americas bombers would be able to stop the aggression in K by destroying the communist supply lines. Therefore Truman believed it was possible to defeat NK without any commitment of American ground troops. In conclusion the Korean war was another course of the Cold war in which the two superpowers fought to show that their way of life was better than the other. The underlying reason for the American involvement in the K war was due to containment which meant that the US would do anything to prevent anymore countries becoming communist. Korea was therefore a way of sending a message to the SU that the US would not stand by idly and watch the world fall into communist hands. ...read more.