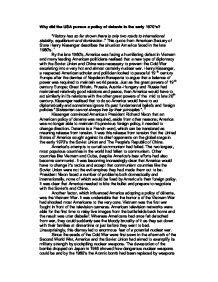 Why did the USA pursue a policy of detente in the early 1970's?

Why did the USA pursue a policy of detente in the early 1970's? "History has so far shown there is only two roads to international stability, equilibrium and domination." This quote from American Sectary of State Henry Kissenger describes the situation America faced in the late 1960's. 1 By the late 1960's, America was facing a humiliating defeat in Vietnam and many leading American politicians realised that a new type of diplomacy with the Soviet Union and China was necessary to prevent the Cold War escalating into a very hot and almost certainly nuclear war. Henry Kissenger, a respected American scholar and politician looked to peaceful 19th century Europe after the demise of Napoleon Bonaparte to argue that a balance of power was required to maintain world peace. Just as the great powers of 19th century Europe; Great Britain, Prussia, Austria-Hungary and Russia had maintained relatively good relations and peace, then America would have to act similarly in it's relations with the other great powers of the mid to late 20th century. Kissenger realised that to do so America would have to act diplomatically and sometimes ignore it's past fundamental beliefs and foreign policies "Statesmen cannot always live by their principles". 2 Kissenger convinced American President Richard Nixon that an American policy of detente was required, aside from other reasons; America was no longer able to maintain it's previous foreign policy, it needed to change direction. Detente is a French word, which can be translated as meaning release from tension. ...read more.

America was still superior to the Soviets in terms of the extent of its military power but the effect of this was having a dangerous effect, as the Soviet's were always trying to catch up. If America was to slow down it's production of weapons, the Soviet's would also have to. Kissenger realised that American relations with the Soviet Union had to be radically improved. Nixon and his immediate successors as Presidents of the United States (Gerald Ford succeed Nixon after his impeachment in 1974 and Jimmy Carter was elected President in 1976 and continued until 1980) aimed to ease tensions with both China and the Soviet Union with several groundbreaking concessions, meetings and agreements. China responded to America's call for d�tente. She was fearful of her isolation in the world, particularly after the way America had behaved in Vietnam. Since 1949, America had supported Chinese Nationalists in Taiwan. Although China had nuclear weapons, her stores were considerably less than either America or the Soviet Union's. Increased tension with the USSR. In 1971 China invited an American table tennis team to take part in a tournament, a monumental step. America responded by easing trade restrictions with China and supporting China's application for membership of the United Nations, something that previously it had blocked completely. When China was accepted as a member of the United Nations in October 1971, President Nixon became the first President of the United States ever to visit China, even if a massive American naval force was kept at Taiwan in case. ...read more.