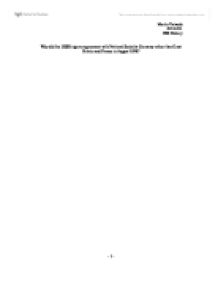 Why did the USSR sign an agreement with National Socialist Germany rather than Great Britain and France in August 1939?

Why did the USSR sign an agreement with National Socialist Germany rather than Great Britain and France in August 1939? A. Plan of Investigation As the Great Purges were nearing an end Stalin had gained more freedom to pursue foreign policy goals, as internal opposition had been dealt with. In 1939, the USSR was having simultaneous talks of a possible political military alliance with the British and the French on one hand and n**i Germany on the other. This investigation seeks to determine why Stalin's Soviet Union chose to side with the Germans, who's fascist ideology, was seemingly incompatible with the Soviet ideology of Communism. Firstly this investigation will seek to establish Stalin's foreign policy objectives in the late 1930s, and then it will go on to determine, why an agreement with Germany was best suited to fulfill these objectives. The primary time frame that this investigation will consider will span from the Munich Conference in September 1938, to the signing of the n**i-Soviet Pact in August 1939. Word Count-144 words B. Summary of Evidence o In 1936, during an interview Stalin stated that that the USSR does not have territorial ambitions.1 o Excerpts from contemporary Soviet literature2: 'We shall go to the Genghis river, We will fall in fierce battles, So from Japan to England, Brightly can my homeland shine.' -Pavel Kogan 'There will be only a Soviet nation And one - Soviet people.' ...read more.

The source's value for shedding insight on Soviet foreign relations lies in the fact, that the author, a diplomat himself has compiled much of the evidence from personal contact with figures from diplomatic circles of the time period. Thus, the source has detailed information about Soviet international relations, which may not have been available to other historians at the time of the writing. The author also draws much information from his interviews of Hans von Herwarth, 'known affectionately in diplomatic circles as Johnnie'12, who was a diplomat in the German Embassy in Moscow in the 1930s and was present at the signing of the n**i-Soviet Pact. However, herein in lies the source's weakness, as Vulfson seems to have grown sympathetic towards Johnnie and his colleagues, and at times overstates their importance in the events of 1939. Radzinsky, Edvard. 1997. Stalins. Riga. Zvaigzne ABC, 2004. Edvard Radzinsky's Stalin is a study of Stalin's life and his ascension in politics. Since the author is Russian and has had access to archives that may have been denied to many foreign historians, such as the Archive of the President of the Russian Federation (Former personal archive of Stalin), the Former Archive of the Central Party and the State Archive of the Russian Federation (Former Central State Archive of the October Revolution). The author's fascination by Stalin's phenomenal character and personality cult, is a central aspect of the book, which hints of Russian neo-nationalism, and the author may perhaps have over glorified Stalin's role and value as a historical figure in some respects. ...read more.

Prior to this, their attitude towards the Russians can be viewed as being unserious e.g. the symbolic nature of the French-Russian treaty over Czechoslovakia was best demonstrated in Stalin's absence in Munich. Stalin was clearly upset by this, as he called a Politburo meeting in the middle of the night. Furthermore, Stalin knew that the West were distrustful of him, and Germany and Russia had enjoyed successful military and economic cooperation in the past, thus at least in the short term an agreement with the Germans was the safer move. Word Count-571 words E. Conclusion Stalin's foreign policy in the late 1930s 'remained one of fence sitting'14 It is clear that he skillfully manipulated with both parties, to ultimately push them into offering the terms most beneficial for the USSR. Ideological differences were not seen as an obstacle to diplomatic relations in the short term, where land and power were to be gained, especially since any Party members who would object to this had been removed during the Great Purges. The main reasons for Stalin's reconciliation with Hitler lay in the fact that, such rapprochement helped Russia avoid a two front war, allowed it to enter the war late at a strong position, whilst it had rebuilt its forces and the other nations were slowly being exhausted by the fighting. Moreover, a pact with Germany granted Russia a sphere of influence in Eastern Europe, thus enabling the Communists to acquire more territory and spread their ideology. Word Count-151 words F. ...read more.