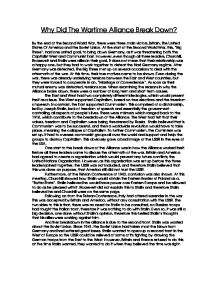 Why Did The Wartime Alliance Break Down?

Why Did The Wartime Alliance Break Down? By the end of the Second World War, there were three main victors, Britain, The United States Of America and the Soviet Union. At the start of the Second World War, this, "Big Three", had one united goal; to bring down Germany, as it was threatening both the Capitalist West and Communist East. However, even though all three leaders; Churchill, Roosevelt and Stalin were allies in their goal, it does not mean that their relationship was a happy one, but they had to work together to defeat the n**i Germany regime. After Germany was defeated, The Big Three met up on several occasions to deal with the aftermath of the war. At this time, their true motives came to be shown. Even during the war, there was already underlying tensions between the East and West countries, but they were forced to cooperate in an, "Marriage of Convenience". As soon as their mutual enemy was defeated, tensions rose. When examining the reasons in why the Alliance broke down, there were a number of long term and short term causes. The East and West had two completely different ideologies, which would present itself as a issue. ...read more.

The n**i Soviet packed aided the suspicions towards Stalin from America and Britain. In 1939, Stalin and Hitler signed the n**i Soviet Aggression Pact. They agreed not to fight each other. This pact was supposed to last for ten years but only lasted for two. Both countries then decided that they would split Poland between them in secret. This pact outraged Britain and France. This was an act of backstabbing, the fact that a so called ally had gone and signed and pact with the enemy. Stalin signed this pact for many reasons, including that he didn't think that Britain and France were strong enough to oppose Hitler. Also one of Stalin's goals was to take over the Baltic States in Poland, in which he hoped to achieve by signing the pact. Furthermore, by signing the pact, it would delay Germany's attack on the USSR, thus giving Stalin time to prepare. Naturally, now there was a great deal of mistrust towards Stalin for this act of betrayal. A short term reason for the breakdown of the alliance was a new hard-line attitude which was adopted by America at Potsdam in 1945. n**i Germany was now defeated, other issues were now a priority. However tensions at this conference were not helped by America. President Roosevelt had died in April of 1945. ...read more.

The West didn't believe this and the Soviet Union was seen as merciless. In conclusion, a mixture of the Allies actions all led to the breakdown of the Alliance. There was a great sense of misjudgement and misassumptions from all sides which planted seeds of betrayal in each of the Allies minds; Britain and France mistrusted Stalin, while Stalin mistrusted Britain and France. The Alliance was never going to be a strong successful bond in the first place, as none of the Allies involved thought the opposition were truly trustworthy. The breakdown of the alliance was inevitable. The allies had opposing ideologies which conflicted with eachother, therefore it was nearly impossible for them to get along and compromise.. The allies each felt feelings of suspicion, fear and mistrust because of their opposing ideologies. The countries involved in the alliance had all in previous years done actions which created unkind feelings towards each others countries, such as the USSR's heartless actions in watching the Poles be crushed by Germany, and also the fact that USSR was not allowed into the League Of Nations, which was constructed by the USA. Therefore I am concluding with a post-revisionist point of view, that there was no sole country responsible for the breakdown of the alliance, but all the countries, the incapability of compromise and opposing ideologies all added to the unavoidable collapse of the alliance. ...read more.