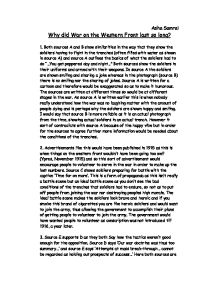 Why did War on the Western Front last so long?

Asha Samrai Why did War on the Western Front last so long? 1. Both sources A and B show similarities in the way that they show the soldiers having to fight in the trenches (often filled with water as shown in source A) and source A outlines the basics of what the soldiers had to do "...You get peppered day and night..." Both sources show the soldiers in their uniforms and armed with their weapons. In source A the soldiers are shown smiling and sharing a joke whereas in the photograph (source B) there is no smiling nor the sharing of jokes. Source A is written for a cartoon and therefore would be exaggerated so as to make it humorous. The sources are written at different times so would be at different stages in the war. As source A is written earlier this is when nobody really understood how the war was no laughing matter with the amount of people dying and is perhaps why the soldiers are shown happy and smiling. I would say that source B is more reliable as it is an actual photograph from the time, showing actual soldiers in an actual trench. However it sort of contradicts with source A because of the happy vibe but in order for the sources to agree further more information would be needed about the conditions of the trenches. ...read more.

This would have been the situation at the time in 1917 as Politicians would have been worried about the battle of Somme and would have wanted to devise a new offensive for the war. Ways that this source is unreliable is that this is all Haig's opinion and therefore doesn't make it correct. He thinks that Germany will fall within the next six months, whereas the war didn't end until the 11th November 1918, over a year afterward. Haig doesn't want a new attack as he thinks that this would be too costly. I think that this source is more reliable than not because none of it would be exaggerated as this is from a diary and it backs up our knowledge of the Somme and how it was alarming Politicians and the public back home, giving a reason for why Haig met the War Cabinet in London. Also, it's not all just Haig's own opinion as he also includes Lloyd George's opinion of 'The decisive moment of the war would be 1918.' Therefore this account isn't just one-sided. Asha Samrai 5. There are a number of strengths of Source G as an interpretation of the war on the western front, such as Black Adder gives a good insight of how the soldiers would prepare for a battle such as The Somme. ...read more.

The war on the western front lasted so long due to a number of reasons. Firstly, the conditions of the trenches as shown in sources A and B would have made many men ill and infected with all sorts of diseases and so many men died in the trenches let alone the battlefield plus these trenches would have taken so long to dig out, at this point there would be no fighting. Secondly, as source I shows, the generals weren't really sure on what they were doing, such as the Battle of the Somme where they just marched thousand of men across no-mans land in order for them to all get killed. Another reason for why the war lasted so long was that communications between the trenches were a problem (source H). The generals found it difficult to send orders to the soldiers before it was too late. The generals also thought that the army with the most men and ammunition would win the war which didn't really get any side anywhere. Both sides lost many men in battles such as Ypres and The Somme so the damage done to both sides would be equal and nobody would be winning the war. The same was also with territory. Whatever one side lost they would regain it back. I think that it's not just reason that caused the war to last so long but all of them contributed to the duration of it. 1,687 words ...read more.