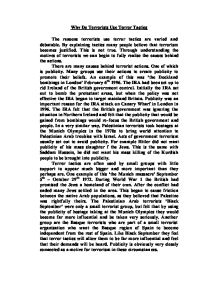 Why Do Terrorists Use Terror Tactics

Why Do Terrorists Use Terror Tactics The reasons terrorists use terror tactics are varied and debatable. By explaining tactics many people believe that terrorism becomes justified. This is not true. Through understanding the motives of terrorists we can begin to fully realise the causes behind the actions. There are many causes behind terrorist actions. One of which is publicity. Many groups use their actions to create publicity to promote their beliefs. An example of this was 'the Dockland bombings in London' February 6th 1996. The IRA had been set up to rid Ireland of the British government control. Initially the IRA set out to b**b the protestant areas, but when the policy was not effective the IRA began to target mainland Britain. Publicity was an important reason for the IRA attack on Canary Wharf in London in 1996. The IRA felt that the British government was ignoring the situation in Northern Ireland and felt that the publicity that would be gained from bombings would re-focus the British government and people. ...read more.

The war against Germany had ended on May 7th 1945, but the war with Japan continued for a further four months. The Japanese continued to frantically fight on. It was thought that the only way to get Japan to surrender would be a full-scale invasion of the entire country. The invasion would be cancelled though, as the US and British believed the number of casualties would be too great. Instead, the first atom b**b was to be dropped on a Japanese city called Hiroshima. Three days later another was dropped on Nagasaki, which was also a Japanese city. The effects were devastating. Both bombs exploded with a force of 20 000 tons of TNT. The death toll was never exact but an estimated 70-100 000 died with a further 200 000 which would also suffer, and die from radiation sickness. Morale had definitely been lowered and as a result the Japanese surrendered. In 1989 the Chinese government massacred Chinese students who were calling for democracy in Tianamen Square. The government hoped that this would undermine any potential opposition within the country. ...read more.

The concept of war is also viewed differently by terrorist organizations. The Al Qaeda believe that they are at war with the US and that in fact the acts of terrorism to them are simply a particular tactic within war. Therefore the September 11th 2001 acts of terrorism were merely a tactic of war to the Al Qaeda. World. Terrorists often believe that their terror tactics act as a cleansing force. This could involve cleaning the governments as actions are taken or individuals that they regard as evil, impure, or in the wrong. These terrorists often regard themselves as freedom fighters. This could apply to the Americans dropping A-bombs on Japan. Also the Al Qaeda attacking the twin towers on September 11th. Both believed that the actions taken were for greater good. The US to remove the evil Japanese government and therefore end the war. The Al Qaeda believed they were cleansing the world of evil. The US influence on the world. All of these reasons and examples of terror tactics fit into the categories of urban terrorism, war terrorism, international terrorism, government terrorism and freedom fighters. The aims of these different types of terrorism are all different. ...read more.