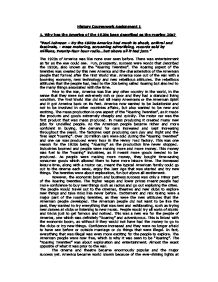 Why has the Americaof the 1920s been described as the roaring 20s?

History Coursework Assignment 1 1. Why has the America of the 1920s been described as the roaring 20s? "Paul Johnson - By the 1920s America had much to shock, enthral and fascinate, - mass motoring, screaming advertising, records sold by millions, twenty-four hour radio...but above all it had jazz." The 1920s of America was like none ever seen before. There was entertainment as far as the eye could see. Fun, prosperity, success were words that described the 1920s, also known as the "Roaring Twenties". The Roaring aspect of the twenties was created by this new America and the characteristics of the American people that formed after the First World War. America rose out of the war with a booming economy, new technology and new rebellious attitudes. The rebellious attitudes that the people had, lead to the 20s being called Roaring but also led to the many things associated with the time. Prior to the war, America was like any other country in the world, in the sense that they were not extremely rich or poor and they had a standard living condition. The First World War did not kill many Americans or the American Spirit and it got America back on its feet. ...read more.

The cinema and theatre became enormously popular and the major success yet. America became world known because of the ever-shining lights at Hollywood and big screen cinemas with motion pictures. Along with the motor car, gained confidence and money, the American people went to the cinema very often to see the movies such as Charlie Chaplin (see Figure 1). The cinemas showered new genres of movies, which displeased the older generations, but made youngsters excited. The entertainment side of life became extremely popular, and anything new would be tried by the American people. Hollywood made over $800,000,000 in just one year during the "Roaring Twenties". Sport became equally successful and popular, and sporting stars such as Babe Ruth were earning millions. People continued their Roaring lifestyle and began to gamble on sporting events and also try new and exciting ones such as car racing. As the music and dancing styles changed, new bars and clubs opened up. People would go with their wives or girlfriends and try the new dances such as the "Charleston" and the new music, Jazz. The 1920s was described as the Jazz age because of the influence that Jazz had on the American people. ...read more.

Speakeasies became very popular and accepted within American society. Along with alcohol, they all contributed in creating the "Roaring Twenties" because the atmosphere and the clubs were 24/7 and very wild and exciting. Although alcohol was illegal at the time, there was a 600% increase in alcohol related deaths, which shows how the people were rebellious and how active and "roaring" the country was. America changed a great deal after the First World War, and during the 1920s, was referred to as "Roaring" by other countries. The American people were richer, happier but above all more rebellious and confident and were willing to take risks. They enjoyed anything that was rebellious and exciting. It was known as "Roaring" because of what the new American society stood for. There was gambling, prostitution, illegal drinking, crazy stunts and all sorts of new things that no one had seen before. America was certainly the land of excess as some historians refer to it as, but it was most of all "Roaring" because the 1920s was so unique and alive compared to what it had previously been and the flame of the "Roaring" fire was getting bigger and bigger as entertainment and industries grew. The economic boom was the spark to the fire, but it was only "Roaring" because of what the people did with their new freedom and lifestyle. ...read more.