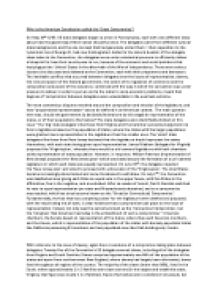 Why is the American Constitution called the Great Compromise?

﻿Why is the American Constitution called the ?Great Compromise?? On May 14th 1787, 55 state delegates began to arrive in Pennsylvania, each with very different ideas about how the governing of their nation should function. The delegates came from different cultural state backgrounds, and the one concept that had genuinely united them ? their opposition to the tyrannical rule of George III, had now disintegrated. Added to the natural dualism of the delegate ideas taken to the Convention, the delegates were under substantial pressure to efficiently deliver a blueprint for how their country was to run, because of the economic and social problems that had plagued the ?United? States in the aftermath of the War of Independence. There were various issues to be discussed and debated at the Convention, each with their proponents and detractors. The inevitable conflicts that occurred between delegates over the issues of representation, slavery, the role and power of the federal government, the extent of its regulation of commerce and the composition and power of the executive, combined with the way in which the convention was under pressure to deliver in order to put an end to the nation?s socio-economic problems, meant that degrees of ?compromise? between delegates were unavoidable in the eventual outcome. The most contentious disputes revolved around the composition and election of the legislature, and how "proportional representation" was to be defined in an American context. ...read more.

With reference to the issue of slavery, again there is evidence of a compromise taking place between delegates. Twenty-five of the Convention's 55 delegates owned slaves, including all of the delegates from Virginia and South Carolina. Slaves comprised approximately one-fifth of the population of the states and apart from northernmost New England, where slavery had largely been eliminated, slaves lived throughout all regions of the country. The majority of the slaves (more than 90%), lived in the South, where approximately 1 in 3 families were slave owners (in the largest and wealthiest state, Virginia, that figure was nearly 1 in 2 families). Slaves themselves were considered not people, but property and so the main question here was whether or not slaves should count as people in terms of representation. The (mainly southern) ?Slave states? like South Carolina and Georgia had economies which relied almost solely on the slave trade and the industry and commerce it was connected to, and in addition, the entire agrarian economy of the South was based on slave labour, and so the Southern delegates to the Convention were unwilling to accept any proposals that they believed would threaten the institution, and so would not tolerate an anti-slavery sentiment in the constitution. States like these wanted slaves to count fully as members of the population, so that the slave states would receive more representation in the federal government. ...read more.

Hamilton felt that the separate colonies had been weak and divided and so the union needed a strong and effectively centralised national government with substantial powers to protect the people?s liberty. The contentiousness of the debate surrounding the issue of the powers of the federal government, combined with the way in which the convention was under pressure to deliver a constitution quickly meant that the Founding Fathers realised that the issue could not be completely solved at this time. This led to the formation of the ?Elastic Clause? in the Constitution which stated that the Federal government had ability to ?make all Laws which shall be necessary and proper? in order to govern. To conclude, the American Constitution, ratified in 1787 was clearly a compromise. The delegates themselves found it hard to agree on most issues, and eventual resolutions of these issues involved a blend of the ideas of both sides. For example Congress is a mix of the ?Big? and ?Small? state ideas ? (it is a bi-cameral legislature). Fundamentally, the fact that the convention was under pressure to deliver a constitution, due to the continent?s socio-economic problems the previous year, ensured that the delegates were prepared to compromise on the issues in hope of creating further resolutions in the future. This is clear from the fact that, within two years of the convention, there were 10 amendments to the constitution passed which became the ?Bill of Rights?. ...read more.