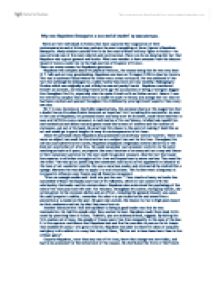 Why Napoleon Boneparte was a successful leader?

Why was Napoleon Bonaparte a successful leader? By Mahrukh Hyder. There are few individuals in history that have captured the imagination of their contemporaries and of historians; perhaps the most compelling of these figures is Napoleon Bonaparte. Many scholars consider him to be the most brilliant military figure in history -- he was certainly one of the most colorful and controversial. There can be no denying the fact that Napoleon was a great general and leader. What one wanders is how someone from the obscure island of Corsica could rise to the high position of Emperor of France. There are many reasons for Napoleons greatness. Napoleon was complex about his physical features, the reason being that he was very short (5 ft tall) and not very good-looking. Napoleon was born on 15 August 1769 in Ajaccio; Corsica. This was a backward island where his father was a minor aristocrat. He was ashamed of the fact that although he belonged to a noble family they were not very wealthy. Belonging to Corsica which was originally a part of Italy he was not purely French. Napoleon considered himself an outsider, not learning French until age 10; accusations of being a foreigner dogged him throughout his life, especially since he spoke French with an Italian accent. ...read more.

Napoleon was able to relate his ideas of conquest and glory to his soldiers in a way that inspired them, "Better not to have been born than to live without glory". Emperor Napoleon, more than any man of his time, knew that change was inevitable, and had to be promoted for the betterment of the masses. He distributed the fruits of the French Revolution, namely liberty and equality to all countries he conquered. He was the first in the old monarchial Europe to allow farmers the possession of their lands. He passed numerous laws towards the encouragement of liberal arts and professional studies. Napoleon took personal interest in all these reforms and personally sat through 38 out of the 87 commission meetings for the reforms. Such was his interest and involvement in these laws that a meeting never ended until the law under consideration was rectified. The greatest commemoration to this body of laws, known as the Napoleonic Civil Code, is the fact that various variants, and some even unchanged are still practiced in every country in Europe and many countries around the world. Even while on military campaign to Egypt, he had an entire entourage of scholars and intellectuals along with him to study the ancient culture. The Rosetta Stone, which finally unlocked the secrets of the Pyramids to the world, was found during this campaign. ...read more.

This ability to execute clear and lightening fast orders separated Napoleon from all the other generals of his time, and gave him the title of one the Best Generals to ever wage war at any given time. In business as in battle it is very important to exploit an advantage that has been handed to you by your opponent or time. It also forms an important characteristic of a successful leader, to recognize and utilize a given opportunity to the advantage of the team. Napoleon never missed out on any such gifts handed to him. Be it the mistake of an opposing general, or the contour of the terrain, he exploited it to the fullest. Even as an administrator, Napoleon's rise to power first as First Counsel and then as Emperor can be attributed to this rule. 'Impossible' n'est pas fran�ais.( 'Impossible' is not in the French language). The word impossible was not a familiar word to Napoleon. He was successful in what he tried to achieve because he let nothing stand in his way. Could someone, like Napoleon, truly stand as an individual and change the course of history? Yes, and it happened. Napoleon was just one of many leaders who led his people, and changed history forever. These points just go to show that one does not have to be born great to achieve greatness; it all depends on one's incentive to acquire greatness. Words: 1740. ...read more.