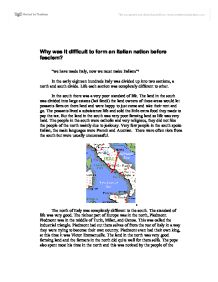 Why Was It Difficult To Form an Italian Nation Before Fascism?

Why was it difficult to form an Italian nation before fascism? "we have made Italy, now we must make Italians"� In the early eighteen hundreds Italy was divided up into two sections, a north and south divide. Life each section was completely different to other. In the south there was a very poor standard of life. The land in the south was divided into large estates (lati fandi) the land owners of these areas would let peasants farm on there land and were happy to just come and take their rent and go. The peasants lived a subsistence life and sold the little extra food they made to pay the tax. ...read more.

� The north of Italy was completely different to the south. The standard of life was very good. The richest part of Europe was in the north, Piedmont. Piedmont was in the middle of Turin, Milan, and Genoa. This was called the industrial triangle. Piedmont had cut them selves of from the rest of Italy in a way they were trying to become their own country. Piedmont even had their own king, at this time it was Victor Emmanuelle. The land in the north was very good farming land and the farmers in the north did quite well for them selfs. ...read more.

In 1860 a man called Giuseppe Garibaldi Invaded Sicily with encouragement from Cavour. He had and army of a thousand known as the Red Shirts, they used popular support to defeat a Bourbon rulers' force that was ten times the number. Subdued Sicily and Naples, Two Sicilies joined Sardinia, and in March 1861 they moved up to the north of Italy and met the king and hid army in Rome where he knelt before him and said "we have made Italy, now we must make Italions"�. � Italy the country was united. But due to the north-south divide, language barriers, etc. It was going to be much harder to unite the people of Italy. [G1]� Quote from D'Azeglio, Italy surrenders to Victor. � Picture from: http://www.cilea.it/WWW-map/NIR-map.html � Picture from: http://www.reformation.org/garibaldi.html [G1] ...read more.