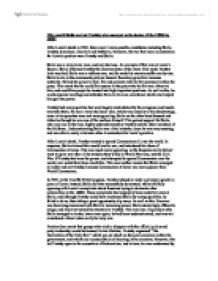 Why was it Stalin and not Trotsky who emerged as the leader of the USSR by 1929?

Why was it Stalin and not Trotsky who emerged as the leader of the USSR by 1929? After Lenin's death in 1924, there were 5 main possible candidates including Stalin, Trotsky, Kamanev, Zinoviev and Bukharin. However, the two that were in contention for Lenin's position were Trotsky and Stalin. Stalin was a very clever man, and very devious. An example of this was at Lenin's funeral. Stalin informed Trotsky the incorrect date of the event. This made Trotsky look very bad. Stalin was a ruthless man, and he made his enemies suffer one by one. Stalin's role in the communist party as General Secretary gave him immense authority. He had the power to hire, fire and promote who he felt necessary within the party. This meant that he could fire anyone in the party who he felt was a threat to him, and could hire people he trusted into high important positions. As well as this, he could organise meetings and schedule them to his own accordance which also helped him get into power. ...read more.

This was another reason that Stalin emerged as leader and not Trotsky, because Communism at home was more popular than World Communism. In 1923, at the Twelfth Party Congress, Trotsky refused to make a principle speech in place of Lenin. Instead, Stalin did who successfully dominated, whilst skilfully agreeing with Lenin's complaints about Russians trying to dominate other nationalities in the USSR. These complaints had originally been made by Lenin at Stalin, and although Trotsky could have weakened Stalin by acting upon this, he failed to do so, thus letting a great opportunity slip away. As well as this, Zinoviev was becoming concerned with Stalin's increasing power. Stalin deceivingly offered to resign, and Zinoviev turned his attention to Trotsky. This was also a big reason why Stalin emerged as leader, since once again, he had been underestimated, and was not considered a threat when really he truly was. Factionalism meant that groups who tried to disagree with the official policy and party leadership would be banned. ...read more.

By 1926, Stalin had gained much support, and in a last desperate attempt, Trotsky, Kamanev and Zinoviev joined forces to attack Stalin. They were known as the United Opposition but by this time there actions were too late. Stalin was too powerful by this stage, and had emerged as leader since members of the Politburo had failed to recognise him as a threat. Later in the year, they published Lenin's testament. The three were expelled from the party, and by 1927 all opposition propaganda was banned, This was enforced by the Secret Police, which were also a reason why Stalin won the leadership contest. They removed anyone who went against the government. In conclusion, as a result of Trotsky's arrogance, Stalin's skills and abilities were put aside, and he was not considered a threat until it was far too late. Stalin's deviance and ruthlessness helped him to eliminate the opposition, such as his clever funeral trick, and his views on Russian policies won over the Russian people. It is because of these factors, that Stalin emerged as leader of the USSR and not Trotsky. ...read more.