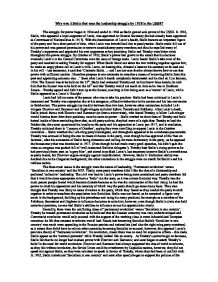 Why was it Stalin that won the leadership struggle by 1928 in the USSR?

Why was it Stalin that won the leadership struggle by 1928 in the USSR? The struggle for power began in 1924 and ended in 1928 as Stalin gained sole power of the USSR. In 1922, Stalin, who appeared a loyal supporter of Lenin, was appointed to General Secretary (he had already been appointed as Commissar of Nationalities in 1917). With the deterioration of Lenin's health, Stalin became an important figure of the party and for a short period of time, when Lenin was immobilised due to paralyzation. Stalin made full use of his power and was granted permission to remove unsatisfactory party members and thus he expelled many of Trotsky's supporters and appointed his own supporters to key positions; Stalin and Trotsky were bitter rivals throughout the power struggle. By October of 1922, Stalin's power had grown to the extent that his decision overrode Lenin's in the Central Committee over the issue of foreign trade. Lenin feared Stalin's take over of the party and resorted to asking Trotsky for support. When Stalin found out about the two working together against him, he made an angry phone call to Lenin's wife. Lenin, on hearing this, dictated a letter to his secretary to be read out in his will - last testament; it said that 'Comrade Stalin...: and I am not sure that he always knows how to use that power with sufficient caution. ...read more.

As Trotsky's power begin to decrease, Stalin felt that he no longer had to share power with Zinoviev and Kamenev, and soon began to attack Trotsky's belief in the need for world revolution. Zinoviev and Kamenev had always supported the idea of world revolution, as they felt without revolution, the Soviet Union could be overthrown by Capitalist nations, however, they did not speak out against Stalin, as they were reluctant to speak in favour of Trotsky, whom they had been in conflict with. In 1925, Stalin introduced 'Socialism in one country' and soon after openly began to support the policies of the Right-wingers as he was convinced that Kamenev and Zinoviev wouldn't join forces with Trotsky. Kamenev and Zinoviev attacked Stalin's policies, who said they were creating disunity and had them expelled from the Central Committee. They soon joined forces with Trotsky and formed the United/Left Opposition. In 1926, Stalin, with the support of the Right-wingers, used the party machine to reject the Left-wing opposition, who had made many attempts to hold demonstrations and appeal to the party; all three were accused of breaking the ban on factionalism made in 1921 and were removed from their positions, leading to their expulsion from the party in 1927. ...read more.

The main mistake was their underestimation of him and not realising that by taking key positions, he was getting stronger in terms of power. Overall, I believe that the many positions helped Stalin to gain power; I don't feel he wanted to become leader of the USSR in the beginning, but with his growing power, I feel that he realised he would be a good leader, as he was ambitious, hard working and cunning enough to remove all opposition within the space of a few years, without them realising quick enough that it was him and not being able to do anything about it. One more thing I feel let Stalin climb the ladder to power was Trotsky's mistakes: his previous hatred of Lenin, his criticisms of party members, his arrogance and dismissiveness, the fact he didn't attempt to build a stronger powerbase and also because he didn't like getting involved in the 'drudgery of politics'. If he had improved many of these things and had paid attention to Stalin's every action, I feel that there would have been a large possibility of Trotsky having emerged as leader of the USSR, maybe resulting in a different history that has been recorded. (Even though there were other leaders, I don't feel they were at the political level/ability or Stalin or Trotsky). ?? ?? ?? ?? ...read more.