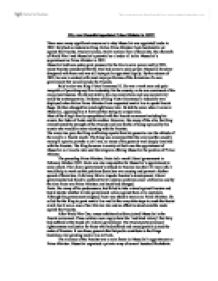 Why was Mussolini appointed Prime Minister in 1922?

Why was Mussolini appointed Prime Minister in 1922? There were many significant reasons as to why Mussolini was appointed leader in 1922: Italy had an indecisive King, Italian Prime Minister Facta hesitated to act against the Fascists, Fascist violence, Italy's national fear of Socialists, the aftermath of World War I and Mussolini's potential as a leader all led to Mussolini's appointment as Prime Minister in 1922. Mussolini had been under great pressure for the Ras to seize power and by 1922, many Fascists considered that the time had come to seize power. Mussolini however disagreed with them and was still trying to be appointed legally. By the autumn of 1922, he was in contact with most major politicians of the formation of a new government that would include the Fascists. Italy's ruler was King Victor Emmanuel II. He was a weak man and quite incapable of providing any firm leadership for the country, as he was convinced of his own powerlessness. He did not stick to his own convictions and was swayed very easily by contemporaries. Evidence of King Victor Emmanuel's indecisive was displayed when Italian Prime Minister Facta requested martial law to quash Fascist thugs. ...read more.

There was a large fear of Socialism within the countryside that won the Fascists much support. Farmers and peasants believed that Socialists threatened their gains. There was considerable resentment over the power of Socialist Land Leagues and many farmers were prepared to take action against the Socialist threat. Many small landowners harmed by Socialist local government and worried about a Socialist revolution joined the movement. Labourers, tenants, farm managers and some better-off peasants were recruited to the squadristi and enabled the Fascist's to challenge the Socialist hold over the countryside. Many landowners and large farmers supported the Fascist movement due to its violent opposition towards the Socialists. The squadristi had no problem obtaining arms; with their anti-Socialist commitment they often received help from the army and police. By the late 1920s, the squadristi had proved so effective that urban industrialists to rural landlords, tired of the indifference of the government, were willing to pay generously for their help against Socialist trade unions. Right-wing violence was being tolerated and important economic groups were drawn towards supporting the Fascists. These groups supported them morally and gave generous financial donations. Many Liberals agreed with the Fascist violence and they were seen as defenders of the country against a left-wing takeover. ...read more.

Mussolini also recognised the fear of Socialism in Italy and acted upon it quickly. Some argue that the success of the Fascists was purely down to Mussolini as the Socialists were a greater party. It could be argued that Mussolini was appointed by entirely constitutional means by King Victor Emmanuel. A telegram was sent inviting Mussolini to be a member of a coalition government as the King hoped it would preserve law and order. However, others must share the blame for Mussolini's appointment, namely Prime Minister Facta and his Liberal government. The Fascists were a minority within the government and many of the elite thought that a period in office would calm them, a few politically experienced thought that their office would be as short as previous ones. Many older politicians ignored many daily acts of Fascist violence and felt the Fascist rule would be short-lived. Although it seemed that Mussolini's appointment as Prime Minister was inevitable, if the King or any politicians had acted differently in events leading up to Mussolini's appointment, it could have been a very different story. In theory, the idea of bringing the Fascists into a coalition government seemed logical and that it could be used in order to tame the movement. In reality however, the Fascists were not tamed and King Victor Emmanuel's appointment may well have been a miscalculation. ...read more.