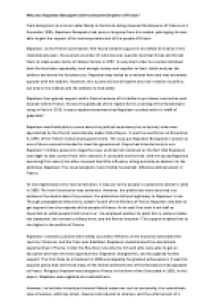 Why was Napoleon Bonaparte able to become Emperor of France?

﻿Why was Napoleon Bonaparte able to become Emperor of France? From being born to a minor noble family in Corsica to being crowned the Emperor of France on 2 December 1804, Napoleon Bonaparte had come a long way from his modest upbringing. He was able to gain the support of his contemporaries and of the people of France. Napoleon, as the French commander, first found notable support in his defeat of Austria in the revolutionary wars. He secured a number of victories over superior Austrian forces and forced them to make peace terms at Campo Formio in 1797. In very short order he counter-attacked, beat the Austrians repeatedly, took enough money and supplies to feed, clothe and pay the soldiers and drove the Austrians out. Napoleon was hailed as a national hero and was extremely popular with the soldiers. ...read more.

A consulate was formed, with the young Napoleon becoming first consul; the other counsels had little influence, acting primarily as advisors to the ambitious Napoleon. The coup had given most of what he wanted: effective political power in France. To lend legitimacy to the new Constitution, it was put to the people in a plebiscite (citizen’s vote) in 1800. The new Constitution was endorsed. However, the plebiscites were doctored, but whatever the doubts about the process, the plebiscites did lend legitimacy to Napoleon’s rule. Through propaganda enforced by Joseph Fouché of the Ministry of Police, Napoleon was able to get support from the majority of the people of France. As he said ‘the truth is not half as important as what people think to be true’. He employed painters to paint him in various modes the statesman, the romantic military hero, and the Roman emperor. This support enabled him to rise higher in the politics of France. ...read more.

On 2 December 1804, a revision was made to the Constitution which recognized Napoleon as emperor, which was endorsed by the plebiscites. He was crowned by Pope Pius VII as Napoleon I on 2 December 1804. All effective decision making was placed in his hands. It was a top-down government, centralised and authoritarian. Napoleon had achieved the title of Emperor he had sought so long to achieve. In conclusion, Napoleon was able to become emperor of France mainly due to the support of the majority of France. There was no truly decisive opposition to his regime, and despite the illiberal measures introduced to France many were still in favour of his rule. He had, amongst other things, maintained the core ideals of the Revolution. The minor illiberal policies were not so serious and did not affect France so much, and therefore on the rise towards being crowned Emperor, they were largely overlooked. ...read more.