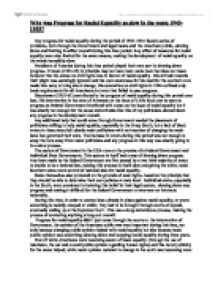 Why was Progress for Racial Equality so slow in the years 1945-1955? Any progress for racial equality during the period of 1945-1955 faced a series of problems, both through the Government and legal means and the American public, slowing down and limiting its affect overall during this time period. Any effect of measures for racial equality were also limited for the same reasons, making the development of racial equality on the whole incredibly slow. Presidents of America during this time period played their own part in slowing down progress. Truman (1945-53) in principle may not have been r****t man that does not mean however that his stance on civil rights was in favour of racial equality. His attitude towards their plight was seemingly ignorant and his own awareness for his need for the southern vote made him wary to bring about change. His committee on civil rights in 1946 outlined only basic requirements for all Americans but even that failed to pass congress. Eisenhower (1953-61) contributed to the progress of racial equality during this period even less. His intervention in the state of Arkansas on the issue of Little Rock can be seen as progress as Federal Government interfered with states on the issue ...read more.

Progress for racial equality didn't just come through the courts or the intervention of Government, the opinion of the American public was very important during this time, not only because changing public opinion helped with racial equality but also because r****t public opinion was something slowing down and stopping racial equality during these years. Even if white Americans were becoming aware of black equality (through the use of television, the car and overall public opinion regarding human rights) and this level publicity for the cause helped, white r****t opinion resistant to change in the south was becoming more prominent in the post war years. A strong anti-communist feeling after the war also added to the resistant of civil rights protesters and they were often unfairly linked, resulting, in some cases, heavy resistance to NAACP activities, slowing down progress of individual civil rights groups such as the NAACP and Scope. Fear as an issue itself was a very major obstacle in the way of racial equality and it showed itself to be highly versatile in slowing or even stopping progress in most areas. As well as politicians and the federal Government fearing the loss of voters on the issue of civil rights, black Americans themselves were often fearful of farthing the progress, participating or even registering to vote. ...read more.

But even with a case such as this progress was extremely slow, the period itself from when the petition was initially signed to when it came to the Supreme Court was drawn out for years. The outcome of the case didn't mean, however, that the problem was then solved and that the progress, however slow, helped massively during the years 1945-1955. The process of desegregation was not only then faced by white racists protesting against but also an unwillingness of black population mainly due to fear for blacks to attempt to even follow this ruling, slowing down the actual affect this law had on racial equality and its overall progress. To summarise any one problem which as more significant throughout this period in slowing down the process of racial equality isn't to say that just one issue was more important than any other but to show how the presence of fear at every stage of the campaign for racial equality was present and having the biggest detrimental affect. This problem of fear throughout the years 1945-1955 in not only present every stage of advancement (courts, government, politicians) but also can be seen as the most prominent problem in slowing down the process, then in turn progress, of racial equality. ...read more.

This is a good answer that focused well on the question throughout and shows a strong understanding of what slowed progress. The conclusion and introduction could both be improved.