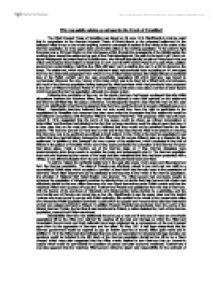 Why was public opinion so outraged by the Treaty of Versailles?

Why was public opinion so outraged by the Treaty of Versailles? The Allied imposed Treaty of Versailles was signed on 28 June 1919. Significantly it must be noted that in comparison to the German imposed Treaty of Brest-Litovsk or the proposed settlement for the defeated Allies it was on the whole forgiving, however universally it rankled in the minds of the entire of the German population, be it the upper class conservative elites or the working population. To the extreme right the treaty was a Schmachfrieden or shameful peace whilst, through the propaganda of the rightist parties the working class viewed the settlement as part of the Dolchstosslegende, 'the stab in the back myth'. Such uni-lateral widespread discontent lead to Scheidemann, who himself dramatically exclaimed 'what hand must not wither which places these fetters on itself and on us?', and his SPD-Centre Party-Democratic Party coalition government contemplating matching the Allies ultimatum and re-starting the war in a bid to denounce the treaty. The settlement, which numbered 440 articles in total, had previously been accepting on 22 June apart from the 'two shameful paragraphs' from which so much bitter hatred spread, this related directly to territorial loss of the Polish corridor and the vast unworkable reparations bill which Germany was forced to compensate. ...read more.

Furthermore Prussia was partitioned from the rest of Germany, with the futures of the provinces of Allenstein and Marienwerder being decided by a plebiciste, and the commercial port of Danzig was turned into a free city. Significantly it was the upper class and the landed Junkers who were forced to comply with Polish authority, this rankled in the minds of the conservative elites who viewed the Polish population as inferior Lausevolk or lice people and moreover they also lost vast tracks of their own estates and land to Poland. In addition Western Prussia had previously been the centre of the historic German Empire, the fact that it was transferred to Poland, a nation detested by much of the German population, caused much bitter resentment. Substantially Germany was additionally forced to pay a vast and in the eyes of many an unworkable reparations bill to the Allies who claimed 'for causing all the loss and damage to which the Allied and Associated Governments and their nationals have been subjected as a consequence of the war imposed upon them by the aggression of Germany and her allies'. By May 1921 it had been determined that the German government would be required to pay an interim payment of twenty billion gold marks and in addition in 1919 the Allies had also indicated that not only compensation for structural damage but also war pensions would be included in the bill. ...read more.

Additionally the Treaty of Versailles contained a preventative clause known as Anschluss which served to ensure that Germany would be unable unite with the region of Austria-Hungary and thus prevented the formation of a superpower. The German population again declaimed that this was hypocrisy as the Allied powers were again not abiding by their principles of National Self Determination which they had previously imposed to suit their own purposes. Furthermore the return of Alsace Lorraine to France and Eupen and Malmedy to Belgium also served as minor problems. Therefore in conclusion it is evident that through the clauses relating to the reparations bill, which would have catastrophic consequences for Germany's economy, and the cession of the Polish corridor, which deeply riled the German population who viewed the Polish race as inferior, and from the manner which the Treaty was passed, the German people argued the treaty was no more than a forced peace or a 'diktat', much bitter outrage was directed at the Allied powers who had 'betrayed' their promises of 1918. Significantly however Germany remained formidably strong, her industrial and economic power, which had in fact been strengthened during the war, remained intact and it was evident that Germany would be able to force of the shackles which had seemingly been imposed by the treaty without much effort. ...read more.