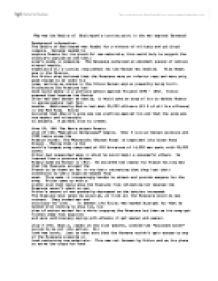 Why was the Battle of Stalingrad a turning point in the war against Germany?

Why was the Battle of Stalingrad a turning point in the war against Germany? Background information- The battle of Stalingrad was fought for a mixture of military and political reasons. Germany needed to capture Russia for its plentiful raw materials, this would help to support the country's population and their army's needs in weaponry. The Caucasus contained an abundant supply of natural mineral wealth, especially oil a crucial requirement for the German war machine. Also wheat was in the Ukraine. But Hitler also believed that the Russians were an inferior race and were only good enough to be under his laws, working as slaves in the future German empire presently being built. Furthermore the Russians had done quite badly in a previous battle against Finland 1939 - 1940. Hitler assumed that because the Soviet Union had been beaten so easily, it would take an army of his to defeat Russia in approximately just four months. Additionally Stalin had shot 35,000 officers (43 % of all his officers) in the Red Army. Hitler believed that Stalin's army was now plotting against him and that the army was now weaker and vulnerable to attacks. A perfect time to invade. June 22, 1941 The Nazis attack Russia. June 22 1941."Operation Barbarossa" begins. ...read more.

Throughout the months of September and October, bitter fighting raged in Stalingrad. The fighting was now street by street and house by house. Seldom, has there been such a bloody and prolonged fight, in the history of time. The Soviet Red Army fought and died for every inch of the city. As a result, the fiercest fighting of the war was taking place. The 62nd Army, commanded by General Vasily Ivanovich Chuikov, was holding on by a thin thread. The Germans had taken 80% of the city and were pushing the Red Army to the Volga River. Nevertheless, the 62nd Army held the German advance in Stalingrad. The British and Americans sent weapons to help and contribute. The Russians offered Germany to surrender but they would not give in. They instead died of exposure and starvation. In Berlin it was a time of mourning. The Soviet army was only weakened not destroyed November 19. The front collapsed as fast moving Soviet troops began encircling German Army Group B from the North and South. This created a panic among the German soldiers, trying frantically to get out of the encirclement. Within four days, the two Soviet armies met 60 miles west of Stalingrad. While the Germans were stuck in the city Russian armies massed on either side of Stalingrad, broke through and came round behind them. ...read more.

"The government of the Soviet Union expresses its unshakable confidence that our valiant army and navy and brave falcons of the Soviet Air Force will acquit themselves with honour in performing their duty to the fatherland and to the Soviet people, and will inflict a crushing blow upon the aggressor." So amongst the hatred and pity, determination was held throughout the battle. This was perhaps the most important emotion, that carried the country through the fight; without it the country might as well have given up. The Germans had captured large amounts of Soviets, three million by the end of 1941, but Starling compensated for these losses by arranging for an estimated 1500 factories to be moved away from the fighting via rail transport. Also by the end of 1941, Germany had conquered vast areas of Russia but had failed to bring them to their knees. There was just too big an enemy to defeat.At the end of 1941, Hitler was left wondering what was holding the Red Army together. The Russians had lost 3 million soldiers (its entire strength at the start of the war.) Fully half of its economic base was in German hands. But Russia was still strong. It had 9 million men of military age left, (enough for 400 divisions) and produced 4500 new tanks over the winter. Germany could not match either of these numbers. It was a sustained battle of destruction that strongly favoured Russia. ...read more.