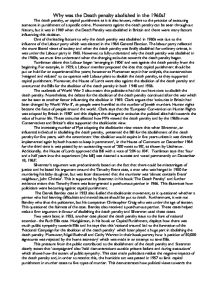 Why was the Death penalty abolished in the 1960s?

Silverman's argument was predominantly based on the fact that there could be miscarriages of justice and he based his argument around the Timothy Evans case, a man who was hanged in 1950 for murdering his baby daughter, but was later discovered that the murderer was 'almost certainly Evans' neighbour, John Christie'. This is supported by Stearman in his book 'The Death Penalty' and further evidence meant that Timothy Evans was later granted a posthumous pardon in 1966. This illustrates how politicians were becoming against capital punishment. The Derek Bentley case in 1953 also fuelled the abolitionist movement, as it questioned whether a person who had learning difficulties and mental issues should be put to death. Furthermore, it was not Bentley who shot the policeman, but his companion Christopher Craig who was under the age of sixteen. This questioned the fairness of the case. Bentley also received a posthumous pardon. These cases helped make a firm argument in favour of abolishing the death penalty and Silverman used these cases. Two years later, in 1955, another case placed the death penalty issue to the fore of national attention- the Ruth Ellis case. ...read more.