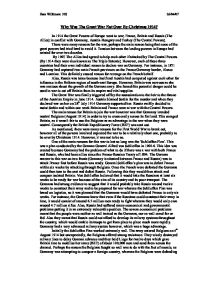 Why Was The Great War Not Over By Christmas 1914?

Why Was The Great War Not Over By Christmas 1914? In 1914 the Great Powers of Europe went to war; France, Britain and Russia (The Allies) in conflict with Germany, Austria-Hungary and Turkey (The Central Powers). There were many reasons for the war, perhaps the main reason being that none of the great powers had tried hard to avoid it. Tension between the leading powers in Europe had existed for over two decades. By 1907 The Allies had agreed to help each other if attacked by The Central Powers. (By 1914 they were also known as The Triple Entente). However, each of these three countries had their own individual reason to declare war on Germany. For instance, in 1871 Germany had captured two main French provinces on the France-Germany border, Alsace and Lorraine. This definitely caused reason for revenge on the French behalf. Also, Russia was tense because itself and Austria had competed against each other for influence in the Balkans region of south-east Europe. However, Britain was nervous as she was anxious about the growth of the German navy. She feared this potential danger could be used in war to cut off Britain from its empire and vital supplies. ...read more.

By six weeks their army was ready whereas the Germans had anticipated that they would have taken at least twelve. This meant that Moltke was forced to send a further 100,000 troops over to the Eastern Front to fend off the Russians. This again weakened the force of the attack through Belgium. Another reason for the failure of the Schlieffen Plan was that the Germans had failed to foresee the effect that the invasion of Belgium would have on Britain, or perhaps they felt that the British army was too weak to cause them any problems. However, the BEF was unusually strong and when the Kaiser ordered General von Kluck, "It is my Royal and Imperial command that you address all your skill and all the valour of my soldiers to exterminate the treacherous English and walk over General French's contemptible little army," the British responded by nicknaming themselves 'The Old Contemptibles.' Also, they didn't realise how strong the motives were for Britain to be angry and worried about the invasion of Belgium. The Belgium ports were very important to the British as the coastline their was the shortest crossing across the channel to Britain. Britain knew that if Belgium were to be captured, then Germany would immediately focus their attention on the United Kingdom. ...read more.

Also, the men had to work in shifts so to dispose of their waste, as it was incredibly unhygienic to leave it near the water or food supply. (Lethal diseases could have developed like cholera). Also, wooden planks had to be put on the ground called 'duck-boards' as otherwise soldiers developed a horrible infection known as 'trench-foot'. Also, trench warfare was incredibly dangerous. Soldiers couldn't risk even slightly raising their head above the ground level, as expert snipers (who used periscopes to see over the walls) would almost certainly pick them off. Also, bullets were being shot at the men most of the time as well as shells. Often there would be huge piles on each side of empty bullet cases and shell fragments. All in all, I conclude that trench warfare was both incredibly slow and incredibly dangerous. The situation of stalemate therefore played a large part in the reasons as to why the First World War wasn't over by Christmas 1914. These two reasons which I have stated, the Schlieffen Plan and the situation of stalemate are both reasons as to why the Great War wasn't over by Christmas 1914. However, I think that even if these events hadn't occurred, then the war still would have gone on longer than this as the concept of such a great war is so huge that nothing could shorten it down. Kate Wilkinson 10S 26/04/07 ...read more.