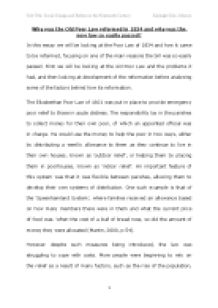 Why was the Old Poor Law reformed in 1834 and why was the New Law so easily passed?

﻿Unit Title: Social Change and Reform in the Nineteenth Century Kayleigh Giles-Johnson Why was the Old Poor Law reformed in 1834 and why was the new law so easily passed? In this essay we will be looking at the Poor Law of 1834 and how it came to be reformed, focusing on one of the main reasons the bill was so easily passed. First we will be looking at the old Poor Law and the problems it had, and then looking at development of the reformation before analysing some of the factors behind how its reformation. The Elizabethan Poor Law of 1601 was put in place to provide emergency poor relief to those in acute distress. The responsibility lay in the parishes to collect money for their own poor, of which an appointed official was in charge. He would use the money to help the poor in two ways, either by distributing a weekly allowance to them as they continue to live in their own houses, known as ?outdoor relief?, or helping them by placing them in poorhouses, known as ?indoor relief?. ...read more.

The attitude towards poor people had relaxed, no longer being seen as a result of immoral lifestyle, and the system was beginning to be abused by outdoor relief poor deliberately having large families in order to gain more allowance (Martin, 2000, p.55). The Royal Commission made its report in 1834, noting that the cost of Poor Relief was rising rapidly and local administration in many parishes were inefficient and often corrupt. In response to the number of recommendations the report made, the new Poor Law was set up later that year (Martin, 2000, p.58). This new law had been passed with significant ease due to a number of reasons. The Government set up a Royal Commission of Enquiry, with twenty-six Assistant Commissioners paid to visit over three thousand parishes in search of this evidence to expose the ?evils? of the existing system, therefore supporting the need for a reform. ...read more.

Finally, this new law did exactly as the Lords and Members of Parliament intended ? to reduce the cost on their own pockets by providing relief for the poor cheaply and efficiently. In conclusion, there were many factors which contributed to a reformation of the old Poor Law being made a necessity. The Commission was the most influential factor in the effortless passing of the new law, and although this evidence to back it up may have been biased, other factors equally played a part in helping the bill come to pass. Ultimately, the government achieved what they set out to do and put a stop to the rising costs of the inefficient Poor Law of 1601. Reference List 1. Martin, D (2000), Britain 1815-1851: A Study In Depth, London: Hodder Education 1. Bloy, M (2002), The 1832 Royal Commission of Inquiry into the operation of the Poor Laws, Available online at: http://www.victorianweb.org/history/poorlaw/royalcom. ...read more.