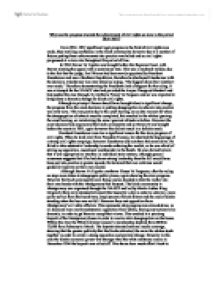 Why was the progress towards the achievement of civil rights so slow in the period 1954-1957?

Why was the progress towards the achievement of civil rights so slow in the period 1954-1957? From 1954-1957 significant legal progress in the field of civil rights was made, thus instilling confidence in the black community, however due to a number of factors putting these achievements into practice was halted and so civil rights progressed at a slow rate throughout this period of time. In 1954 Brown Vs Topeka was brought before the Supreme Court, with Brown winning the appeal with a unanimous vote. This was a landmark verdict, due to the fact that the judge, Earl Warren had been newly appointed by President Eisenhower and was a Southern Republican, therefore he disobeyed Eisenhower with the decision. Eisenhower was later stated as saying, 'The biggest d**n fool mistake I ever made.' Therefore demonstrating the Presidents lack of support for the ruling. It was a triumph for the NAACP who had provided the lawyer Thurgood Marshall and had pushed the case through. It overthrew Plessy Vs Ferguson and so was expected to bring about a dramatic change for black civil rights. Although in principal Brown should have brought about a significant change, the progress from the court decision, to putting desegregation in schools into practice was very slow. This was partly due to the court hearing, as no date was set for when the desegregation of schools must be completed, this resulted in the whites ignoring the court hearing, so maintaining the same ignorant attitude as before. ...read more.

The case of Emmett Till was significant as at first it showed some progress towards a fair trial, with the men accused of lynching arrested, usually they would not have been prosecuted, and a black man standing up and accusing a white man in court. However the jury was composed of 12 white males, and in the defence's closing speech he said, 'I hope every last Anglo-Saxon one of you makes the right decision.' Therefore again showing how when accused the whites stuck together. Again throughout this case Eisenhower gave no leadership and did not intervene, as he did not think that federal intervention was appropriate, and did not want to or aim to do anything to alleviate black problems, even when Emmett Tills mother requested his help. Showing again how little progress had been made. Throughout this time, there were strong black leaders, Martin Luther King, and people that The NAACP used for test cases, Rosa Parks and the 9 children in Little Rock. These set examples to the black community, that through courage and determination, slowly change was possible. However many were not willing to make this commitment, like the 16 children who changed their minds about attending Little Rock High School after passing the exam. This was due to the increasing white resistance and discrimination that they faced. Martin Luther King was arrested for doing 30mph in a 25 mph zone, and his house was bombed. ...read more.

Again Eisenhower showed little leadership, claiming that he did not really know what was in the bill and so did not fight to keep it intact. Along with the filibustering by Storm Thurmond, it resulted in a much weakened bill, not allowing blacks to exercise the right to vote as those who were prosecuted with obstruction would be tried in an all white jury and let off. This shows that from 1954-57 little progress was made, as although ideas are initially passed when put into practice it takes along time for them to be accepted, and so slow progress is made. To conclude from the evidence above it is clear that the building blocks of a strong civil rights campaign were begun between 1954-57, with the shocking legal decision of Brown Vs Topeka. However it is shown that although a decision was made in court, it does not mean that putting it into practice will be quick or easy. It shows that the more united the black community was and the harder that they pushed for change, the more stubborn the whites became, so making the changes impossible to implement without a fight. This case was not helped by the lack of leadership from Eisenhower, as his silence was interpreted as a lack of support for the cause, so discouraging other whites to back it. The lack of progress is shown by the fact that by 1964, a whole 10 years after the Brown decision, only 2/3 of the USA's black high school students attended de-segregated high schools. Therefore it is clear that between 1954-57 the achievement of civil rights progress was slow. ...read more.