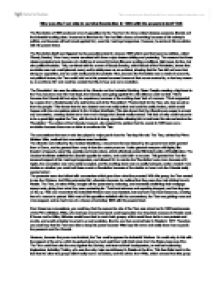 Why was the Tsar able to survive Revolution in 1905 with his powers intact?

Why was the Tsar able to survive Revolution in 1905 with his powers intact? [30] The Revolution of 1905 produced a lot of opposition for the Tsar from the three united classes; peasants, liberals and the industrial working class. It seemed at first that the Tsar had little chance of surviving because of his naivety in politics, and because all had turned against him, even his most loyal supporters. However, he survived this revolution with his powers intact. The Revolution itself was triggered by the peaceful protest in January 1905 which was fired upon by soldiers, called 'b****y Sunday'. From here, events escalated with three major classes striking and protesting. The reasons that these classes protested was because of a build up of economic factors like poor working conditions, high taxes, famine, but also political isolation. This, combined with the events of b****y Sunday, which kicked off the Revolution, shows that revolution was not a well planned event, and is widely seen as an accident, showing that the Tsar did not have that strong an opposition, and so could easily pacify the protests. Also, because the Revolution was a result of economic, not political factors, the Tsar could hold on to his powers because it seemed that no-one wanted to, or had any reason to, to overthrow him and could so contest that this, in fact, was not a revolution. ...read more.

This granted the Tsar the renewed support of his most loyal supporters, and allowed him to survive the 'Revolution' even more because of it. Again, the concession was very easily accepted, and the working class were so easily betrayed, and so created more doubts on whether you could call these events a Revolution because of the doubts on how much the Liberals really wanted reform. The peasants were also bribed with concessions which gave them what they wanted. With this group, the Tsar wanted to use the Okhrana, but Witte persuaded him otherwise because he realised that they were the main driving force in Russia. The Tsar, or rather Witte, brought off the peasants by reducing, and eventually abolishing their mortgage repayments, giving them what they were protesting for. Their land seizures and squatting dropped, and farming was on the up. This now meant that the Industrial Workers were now isolated, but now had more food resources, creating less of a reason to protest. With most of his opposition satisfied with the concessions, the Tsar was gaining more and more support, and so had more of a chance of surviving 1905 with his powers intact. ...read more.