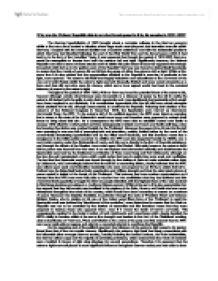 Why was the Weimar Republic able to survive threats posed to it by its enemies in 1918-1923?

Why was the Weimar Republic able to survive threats posed to it by its enemies in 1918-1923? The German hyperinflation of 1923 brought about a complete collapse in the German economy whilst at the same time created a situation where large scale unemployment and starvation was rife within Germany. Coupled with the eventual abolishment of 'passive resistance' and with the substantial problems which Germany had inherited following the end of the First World War and the forced peace which it had lead to, in the form of the Versailles Treaty, it was apparent that through the period of 1918-1923 Germany would be susceptible to threats from both the extreme left and right. Significantly however, the Weimar Republic was able to stave of these attacks and it is within this point where it becomes apparent that through the period which led up to the 'golden years of the Republic' Germany was forced to defend itself ferociously to ensure that the mantle of power did not fall into the grasp of either the extreme left or right. Whilst at the same time it is also evident that the opportunities afforded to the Republic's enemies, in particular to the right, were spurned. The extreme left itself was largely indecisive and subordinate to the command of the now-communist Russia whilst the extreme right was both internally divided and never acted coherently as a force and thus did not seize upon its chance, which some have argued would had lead to the eventual takeover of power by the extreme right. ...read more.

This consequently resulted in the brutal murders of both Liebknecht and Luxemburg which clearly derailed the KPD's ability to function whilst at the same time brought new leaders in the form of the 'Stalinised' working class subordinates of Thalmann, Pieck and Ulbricht to the centre of the party and this ensured that the KPD was never really able to regroup and attempt a concerted attempt to overthrow the Republic. On the opposing end of the political spectrum the influence of the extreme right posed a far greater threat than that of the communist menace. Significantly the extreme right itself had deep connections with the influential elites amongst German society, notably including the landed Junkers, the Ruhr industrialists, the German officer corps and the majority of university professors, which ensured that the minds of students were moulded in favour of right wing ideology for several generations. Therefore it is apparent that the extreme right was well placed to exert significant influence throughout German society and was able to draw support from individuals such as the media tycoon Hugenburg who was dubbed the 'uncrowned King of Germany'. In addition the extreme right was able, through much rightist propaganda, to use the myths of the 'Dolschstosslegende' and 'November Criminals' to generate much public support from those who were appalled by the treaty of Versailles and believed it to be a forced peace designed to crush Germany. Moreover the extreme right itself had established close relations with several paramilitary organisations, including the 'Freikorps' and the 'Stahlhelm', and therefore were able to utilise the fact that they were heavily armed ...read more.

This was apparent when Noske was prepared to use the malicious strength of the 'Freikorps' in order to diminish the threat which the Spartacists offered in 1919. The Weimar Republic itself was also a beneficiary of the fact that many who desired a return to the principles of the traditional elites and to that of the Kaiserreich were forced into voting for democracy due to circumstance. Stresemann's party the DVP, although to the right of the political spectrum, voted for the Republic rather than to the right due to the fact that they feared the prevalent threat of communism in 1919 whilst at the same time believed a more moderate government would result in favourable terms at the Versailles peace conference. In conclusion it is therefore evident that throughout the period of 1918-1923, the Weimar Republic remained in power due to the fact that the threats that both the left and right, although the right offered more significant one, provided were weak and lacked the decisiveness which would have been necessary to overthrow the Republic. Whilst at the same time there was also a sizeable level of support throughout the country for the Republic and therefore they were prepared to defend democracy vigorously and stave of the threats of the extreme left and right. It is however clear that much of the support which the Republic relied upon was there due to circumstance and coupled with the onset of the economically disastrous hyperinflation of 1923, the Weimar Republic began to lose much of the support which had previously carried it through the years of 1918-1923. ...read more.